(My thoughts on the so-called VACCINE HESITANCY in Australia.) 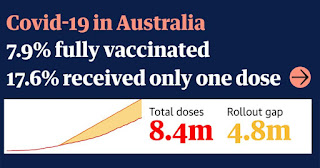 The worsening Sydney COVID outbreak is getting crazier and crazier as the bloody politicians keep on blaming the people of south-west Sydney for the rapid spread of Indian COVID there for they are the poor multi-ethnic people mainly from Arabic and Islamic backgrounds.

Despite the fact that this outbreak was started in rich white suburbs in the wealthy Sydney East by the stupidity of Barejiklian NSW Government. She and her stupid health-bureaucrats let the highly-contagious Indian COVID escape from a FEDEX foreign crew through a stupid limo driver who frequently ferries them to a quarantine hotel from Sydney International Airport.

Rules governing the quarantine drivers were so unbelievably relaxed, despite the extremely-dangerous nature of their job, NSW police couldn’t even find a legal justification to charge the bloody limo driver while the bloody cops have been generously fining the Sydney people left-and-right $1,000 each for not wearing a facemask and $5,000 for each lockdown-violation.

And NSW Police declares openly how many fines, the so-called public health order infringements, they lashed out at Sydneysiders on the TV every morning. Even Australia’s own Deputy PM Barnaby Joyce was remotely fined for not wearing a facemask at a service-station after some National-Hater dobbed him in by calling police. Now we in Sydney are not even allowed to go outside of our Local Government Area.

Many people lost their jobs and normally hand-to-mouth people are now on the verge of starvation after three weeks of this fucking LOCKDOWN. For me I am now surviving on rice and oil and salt only for I am a tough Burmese boy, ha ha ha.

The worse is both NSW State Government and Federal Government blaming the really low rate of vaccination in Australia for current COVID outbreak. They called it the VACCINE-HESITANCY. Not their stupid multiple HOTEL-QUARRANTINE leaks. They are implying that Aussies are so bloody stupid refusing to get vaccinated with a free AstraZeneca Vaccine which will save their lives.

One can’t blame the Australian people for scaring-to-death of AstraZeneca Vaccine being needled into their bodies. After all those cases of severe blood-clotting and horrible deaths due to that stupid vaccine. 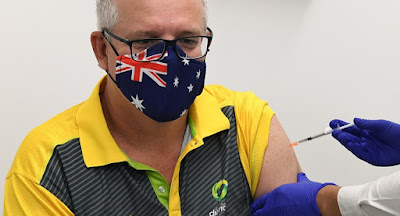 After the horrible stories of COVID outbreak in India where thousands and thousands of AstraZenica (CoviShield) – vaccinated were killed by the new COVID. After Australia’s own Prime Minister refused AstraZeneca and took a jab of Pfizer instead for himself, CRIKEY.

They all have been waiting for the much safer and more effective mRNA vaccines like Pfizer and Moderna vaccines. But our genius Federal Government has forgotten to order enough of those for they have been overly relying on the locally-made AStraZeneca vaccines. Now those unused million doses of AstraZeneca vaccines are sitting idle and rapidly approaching their expiry dates.

(The rural doctor GP shown in this ABC's 7:30 program aired recently has been trying unsuccessfully to get Pfizer Vaccine for herself while she has been jabbing the local populace with AstraZenica vaccine. I was shocked after seeing the program. Maybe there is something we the general public do not know about the AstraZeneca vaccine but the doctors obviously know.)