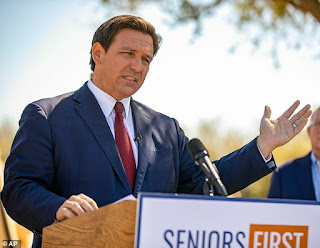 It's clear. Florida got it right': DeSantis boasts he was RIGHT not to lock down booming state as it records 8% fewer COVID deaths than US average (despite packed and mask-less beaches and bars) - and same death toll as lockdown-loving California.

Florida's Republican Governor Ron DeSantis has hit out at those who have previously criticized his no-restriction approach to the COVID-19 pandemic, defiantly telling them: 'Florida got it right'.

The state hasn't had any statewide restrictions for at least six months after DeSantis allowed businesses, including bars and restaurants, to open at full capacity. He also prohibited municipalities from fining people who refuse to wear masks.

His approach was criticized at the time by some health experts and the governors of Democratic states, such as California and New York, who had enforced stricter lockdown measures on their residents.

'Everyone told me I was wrong,' DeSantis said in a fundraising appeal on Tuesday, according to CNN.  'I faced continued pressure from radical Democrats and the liberal media but I refused to back down. 'It's clear: Florida got it right.'

Both rank in the middle among states for COVID-19 death rates: Florida has had 150 deaths per 100,000, while California is at 140 fatalities per 100,000 since the pandemic began. Cases, deaths and hospitalizations in Florida and California have been declining after peaking to record highs in the wake of Thanksgiving.

Florida has had roughly 3 percent more COVID-19 cases per capita than the US total but 8 percent less deaths. While research has found that mask mandates and limits on group activities can help slow the spread of COVID-19, states with greater government-imposed restrictions, such as California, have not always fared better than those without them.

Florida's response to the pandemic has meant its economy has been booming. Spring breakers are currently crowding Florida cities and Miami has seen an influx of of famed New York City restaurants opening up shop.

Despite starkly differing approaches, Florida and California have both experienced almost identical outcomes in COVID-19 case rates. Both states reported steep drop offs in cases following the peak that occurred after Thanksgiving. 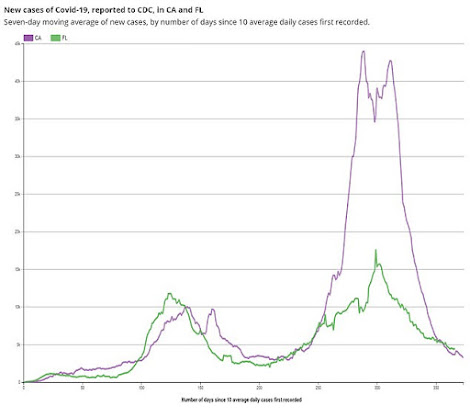 The state's unemployment rate is currently 4.8 percent, according to the Bureau of Labor Statistics. Other states with stricter lockdowns have higher rates, including New York (8.8 percent) and California (9 percent). Experts are now questioning how the two states - Florida and California - have managed to arrive at similar points despite taking such different tactics.

'This is going to be an important question that we have to ask ourselves: What public health measures actually were the most impactful, and which ones had negligible effect or backfired by driving behavior underground?' Amesh Adalja, a senior scholar at the Johns Hopkins Center for Health Security, told the Associated Press.

In a press conference on Tuesday, DeSantis doubled down on his response by saying that lockdowns imposed by other states had damaged the country. 'Those lockdowns have not worked. They've done great damage to our country,' he said. 'We still have millions of kids across this country who are denied access to in-person education. We still have businesses closed in many parts of this country. We have millions and millions of lives destroyed.'

President Biden's CDC director Dr Rochelle Walensky has warned, however, that the number of infections in Florida could spike off the back of Spring Breakers flocking to the state amid the spread of a COVID-19 variant. (Fucking Socialists) 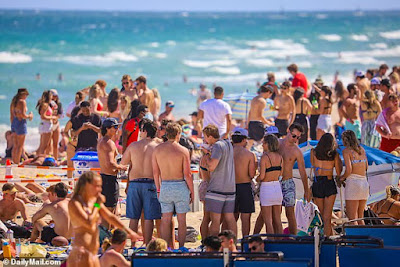 Australian politicians need to display ‘the sameleadership’ as Ron DeSantis

The Australian’s Washington Correspondent Adam Creighton says Australian politicians are going to have to “display the leadership” of Florida Governor Ron DeSantis and stand up to lockdowns.

Discussing the contrast with Australia’s response to the pandemic, Mr Creighton said one of the premiers or the Prime Minister is going to have to display the same leadership as DeSantis. “I think that is extremely unlikely.”

Premier Gladys Berejiklian has announced the NSW lockdown will be extended, as the outbreak continues to grow across Greater Sydney with 97 cases of community transmission.

Ms Berejiklian said people in Greater Sydney including the Blue Mountains, Central Coast, Wollongong and Shellharbour will remain in their homes for another two weeks due to health advice she has received.

"It always hurts to say this but we need to extend the lockdown at least a further two weeks from Friday 16 July to Friday 30 July," she said. The extension will also apply for students who are currently learning from home.

Sky News reporter Danica De Giorgio quizzed Ms Berejiklian on whether the two-week extension would be long enough to get to as close as zero cases as possible. "The advice on the two weeks is provided by health," she responded.

"We will know at the end of the two weeks to what extent we need to extend the lockdown, whether there is any chance of face-to-face learning." The premier said more data was needed before they can reassess the situation but will update NSW residents in a timely manner for business to prepare to open and parents to organise returning to work.

Sydneysiders had hoped to have freedom by this Friday but their hopes were dashed after 97 cases were reported in the latest test results. Of the new locally acquired cases, 61 are linked to a known case or cluster – with 45 being household contacts and 16 identified as close contacts. The source of infection for 36 cases remains under investigation.

There are currently 71 COVID cases receiving care in hospital, with 20 of those in intensive care, and four on ventilators. The outbreak - that originated in Bondi after a limo driver transporting airline crew caught the virus - has grown to 864 cases.

The lockdown was initially set for two weeks - to end on Friday July 9 - but health officials were not ready to come out of lockdown after a spike in COVID-19 infections. It was extended for an extra week, with Sydneysiders hoping they could be freed on Friday July 16 at 11:59pm.

People will only be allowed to leave for five reasons:

obtain food or other goods and services

to provide care or personal needs for vulnerable people

travel for work or education if not possible at home

go out for medical or caring reasons, including obtaining a COVID-19 vaccination