(Fergus Hunter’s article from the SYDNEY MORNING HERALD on July 25, 2021.)

The organisation of an anti-lockdown protest that turned violent in Sydney on Saturday began in fringe online communities teeming with COVID-19 conspiracy theories, anti-Semitism and debunked views on vaccines.

The widely-condemned protest was linked to a “worldwide rally for freedom” and NSW Police said they were not taken by surprise by the event, having monitored plans as they developed in groups on encrypted platform Telegram and spread further on Facebook and Instagram.

Police on Sunday said they had received more than 5500 tip-offs about attendees and identified more than 200 people involved. More than 350 officers policed the event and a dedicated strike force of 22 officers has since been launched to investigate public health order breaches and any other offences.

“What took us by surprise and what disappoints me so greatly is the level of violence that people were prepared to use. That was unprecedented. That’s not Sydney,” NSW Police Deputy Commissioner Mal Lanyon said on Sunday.

Police arrested 63 people during the protest and 35 have been charged with various offences, including assault of a police officer. At least 90 fines were issued for breaches of the public health orders and two men, aged 33 and 36, were arrested and charged overnight for striking a police horse.

Online activists were promoting protests in Sydney, Melbourne and other Australian locations in the weeks before the July 24 events. Popular anti-vaxxer organisations and figures were among the pages then spreading the message to a larger audience.

Joel Jammal, a Sydney activist who promoted the event on Facebook, spoke on the steps of Town Hall on Saturday, rejecting vaccines and lockdowns. “The organisers said this must be a peaceful protest,” he told the crowd. “This is not a violent revolution.” (He gave a rousing speech on Sydney Townhall Steps, surrounded by cops, during the July-24 anti-lockdown protest.)

Various national and city-based channels on Telegram, where the plans for the rallies gained momentum, appear to share some of the same organisers. Administrators of the channels have also promoted far-right groups and figures such as the Proud Boys and Avi Yemini.

One of the key organisers in the channels appears to be 24-year-old programmer Harrison Mclean, linked to previous protests in Melbourne. Mr Mclean did not respond to a request for a comment. In a video posted on his Telegram channel on July 18, Mr Mclean said the protests were about resisting “authoritarian restrictions” and declaring that “we will not comply”.

“This Saturday, the 24th of July, in over 100 cities around the world, we’ll be taking a stand for five important freedoms: freedom of speech, freedom of movement, freedom of assembly, freedom of choice and freedom of health,” he said. Inside the groups, users have shared a vast amount of conspiracy theories about global warming, the mainstream media, vaccines, QAnon, Freemasons as well as anti-Semitic material.

The gathering in Sydney attracted a diverse crowd numbered in the thousands. It included anti-vaxxers, political activists and people angry at the strict public health orders put in place in response to the outbreak of the highly contagious Delta variant of COVID-19.

Jon-Bernard Kairouz, a 24-year-old TikTok personality who recently attracted attention for revealing NSW COVID-19 case numbers before official announcements, attended the rally and was issued with a fine on Sunday. Speaking at the event, Mr Kairouz told the crowd: “For everyone that’s here – small businesses, people that are doing it tough – all we want is freedom.” 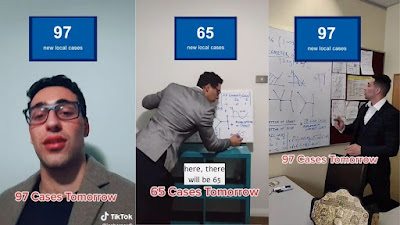 A man standing next to him as he spoke wore a vest promoting notorious English conspiracy theorist David Icke – who believes an ancient race of reptilian beings secretly rules the world – and the next speaker said COVID-19 did not exist.

Former Liberal Party figure John Ruddick, now running as the Liberal Democrats candidate in the federal Sydney seat of Warringah, posted on Twitter about his attendance at the rally and said he was among those to be fined.

“Just had two courteous police officers at my door to advise I will be getting a $1000 fine for attending the Sydney Freedom Rally,” he said on Sunday. “No problem – I’ll frame it and put it on the wall.”

NSW Police Minister David Elliott said there were a number of “political wannabes” trying to use the protest to make a name for themselves. “That’s very disappointing. I think those individuals need to reflect if they are suitable for public office,” he said.

NSW Premier Gladys Berejiklian said she was “absolutely disgusted” by the protest and warned that participants were endangering those closest to them by attending the illegal gathering. “Can I say how absolutely disgusted I was. It broke my heart,” she said. “Millions and millions of people across our state are doing the right thing and it just broke my heart that people had such a disregard for their fellow citizens.”

A number of proposed dates for protests in the coming weeks and months are already circulating among activists on Telegram. “September too far away,” said one user on Sunday. “This needs to happen sooner whilst we have traction, otherwise the evil side will continue to accelerate.” Another said, “So whenever the next one happens, we need to agree on it and then hype it up.” 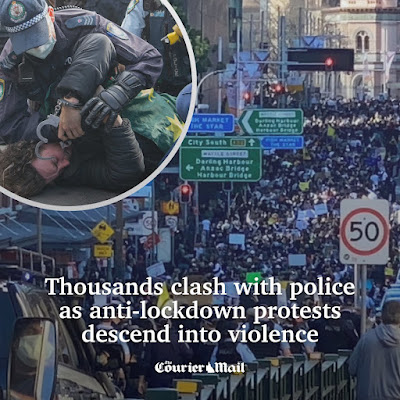