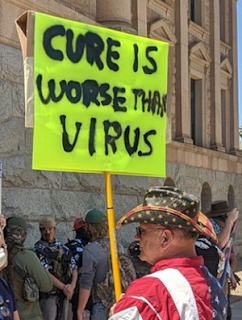 CANBERRA – The debate over the stringency of and exit from the lockdown measures is usually framed as a choice between public health outcomes and the economy. The erosion of liberal democratic freedoms is another component of the tradeoff equation.

Yet it’s possible that in the fullness of time, economies might rebound but the cascade of lockdowns across the world will be shown to have killed more people than it saved, and also more people than died of COVID-19 itself. The lockdown-created non-COVID Grim Reaper comes creeping down six pathways.

First, lockdowns could have a profound and pervasive impact on mental health and lead to more suicides. U.S. experts are warning of an approaching “historic wave” of mental health problems caused by the prolonged “daily doses of death, isolation and fear.”

Dr. Mike deBoisblanc is head of trauma at John Muir Medical Center in Walnut Creek, California. On May 22, an affiliate of ABC TV reported him as saying “we've seen a year’s worth of suicide attempts in the last four weeks.”

In the United Kingdom, the Royal College of Psychiatrists reports a sixfold increase in suicide attempts by the elderly because of depression and anxiety caused by social isolation during the lockdown. There’s also been a surge in 18- to 25-year-old men “badly affected by first-time mental health issues.” Australian experts warn that lockdown-induced 50 percent jump in suicides could kill 10 times as many as the virus.

Second, with elective surgeries and routine screenings suspended, many diseases that are treatable if caught in time will dramatically elevate the death toll. How many of the nearly 2 million new cancers each year, as also heart, kidney, liver, and pulmonary illnesses, will go undetected in the United States?

People at risk from these illnesses total 70-80 million. At 1 percent excess fatality in this group caused by shortages in personnel, supply and equipment resulting from the shutdowns, another 750,000 Americans will die from a policy that was meant to shield the health system but instead partially crippled it.

In the U.K., over 2 million planned and elective operations have been canceled. An internal memo circulated for Cabinet discussion estimated “up to 150,000” could suffer non-COVID-19 premature deaths due to the lockdown, including almost 18,000 cancer patients.

Karol Sikora, a consultant oncologist with the National Health Service, estimates up to 50,000 more U.K. deaths from cancer if the lockdown lasts six months, owing to the lockdown-induced pause in health screenings. Similar stories are coming out of Germany.

Third, the PR campaigns were so successful in terrorizing people about the coronavirus threat that some refuse to go to hospital for fear of catching the virus. “Up to 20 percent of hospital patients in England got coronavirus while in for another illness,” said a recent Guardian headline.

The U.K. has recorded a sharp rise in the number of people dying at home, including from cardiac arrests, because people are reluctant to call for an ambulance. They fear that beds may not be available, or that they might contract the virus in hospital.

Fourth, the lockdowns barred people from some healthy open air lifestyle options in parks, gardens and on beaches, instead cooping them up in high-risk environments like congested living complexes. In New York, two-thirds of new hospital admissions were infected at home while sheltering-in-place.

Prolonged exposure in enclosed environments is high risk; in outdoor settings the risk is under 5 percent. The Guardian reported on May 9, 6,546 more non-COVID-19 deaths at homes across Britain compared with the seasonal five-year average. 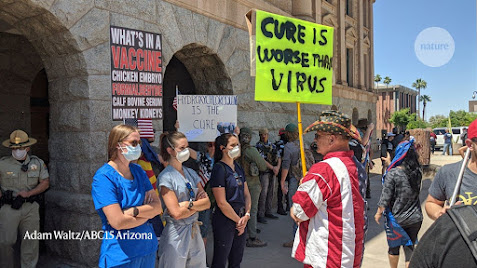 Fifth, to protect the hospital system, patients were discharged into care and nursing homes to deadly effect. About half of America’s COVID-19 deceased were nursing home residents.

An analysis published by the EU Center for Disease Prevention and Control on May 19 showed 50 percent to 66 percent of COVID-19 deaths had occurred in care facilities in five countries: France, Sweden, Belgium, Norway and Spain.

Compared with hospitals, nursing homes suffer from inadequate training, PPE and medical supplies; not enough carers; and no rigorous separation and physical distancing of infected from other residents.

In the U.K., comments Ambrose Evans-Pritchard: “We discharged known, suspected, and unknown cases [from hospitals] into care homes which were unprepared. … We actively seeded this into the very population that was most vulnerable.”

Finally, the long-term impacts of the lockdowns will be deadly for the world’s poorest billion people over the next decade. The World Bank and the World Trade Organization warn of dramatic decelerations and contractions in GDP, with a resulting ballooning of poverty. Oxfam warns the pandemic could push another half billion people into poverty.

The United Nations estimates the global economic downturn could cause “hundreds of thousands of additional child deaths in 2020.” The number of people suffering from acute hunger could nearly double to 250 million from the disruptions to crop production and global food distribution chains.

A study in South Africa suggests the lockdown could kill 29 times more people than it saves. A study by Johns Hopkins School of Public Health warns infant mortality could increase by 1.2 million this year in poor countries and maternal mortality by 56,700 because of ruptured health services.

In India millions of interstate migrant laborers were caught unprepared by the lockdown imposed with four hours’ notice on March 25. Especially after it was extended in mid-April, many decided that with no jobs and wages, and public transport shut, they would rather walk hundreds of miles to home in groups, and die in their home villages than in lonely conditions on foreign soil. Sadly, many have died along the way. The story of 12-year old girl Jamlo Madkam is one of the few to make it into the national and international press. 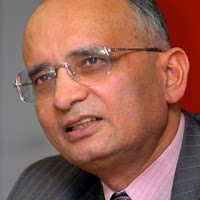 Not all critics of hard lockdown policies are motivated by greed. Conversely, the self-virtuous can sometimes climb so far up the moral high horse that they lose sight of the ground reality. This crisis finally confirms just how disconnected inner-city elites are from the values of liberal international solidarity that animated their intellectual forebears.

(Ramesh Thakur is an emeritus professor in the Crawford School of Public Policy, Australian National University; a senior research fellow with the Toda Peace Institute; a fellow of the Australian Institute of International Affairs; and a former United Nations assistant secretary-general.)