(Translation of the Blog Post direct from Myanmar Express on November-4, 2013.)

More than 700 ex-political-prisoners from all over Burma are now preparing to take the fraudster AAPP to civil courts in both Burma and Thailand where the AAPP is based. They have been accusing AAPP and its boss Bo Kyi of misappropriating the massive amount of funds solicited from international donors while claiming the funds collected worldwide are solely for the so-called political prisoners of Burma.

According to the ex-prisoners group's unofficial spokesperson Zaw Lin Oo -- who was given a 15-year sentence for his 2003 solo-demonstration in front of British Embassy in Rangoon and served nearly 8 years of that harsh sentence in Tharyarwaddy Prison till 2011 when he was released by a Presidential Amnesty – they are suing AAPP to get their full-entitlements promised by AAPP who in turn has solicited funds for that purpose from multitude of sympathetic international donors.


Just last year alone AAP did receive more than a million US dollars from various international donor institutions including US Government’s NED (National Endowment for Democracy), Dutch Government, Government of Norway, The Oak Foundation, The Open Society Institute, Freedom House, Amnesty International, and many other private institutions sympathetic to Burma cause.

AAPP has spent nearly 200,000 US$ a year alone on the overheads including inflated salaries for its bosses like Bo Kyi and their family members living luxurious lives in Thailand. To demand more and  more donations every year from its donors AAPP also has massively inflated the head-counts of so-called political prisoners in Burmese prisons as the funds donated are calculated basing on certain US$ amount for each political-prisoner.

AAPP’s list of political prisoners still incarcerated in Burmese prisons is always doubly longer than any list of actual political-prisoners provided by the Burmese government and other NGOs in Burma. They even ridiculously placed two convicted grandsons of former dictator General Ne Win on their list of so-called political prisoners.

AAPP Bosses are keeping most donors’ funds in their pockets

When BBC contacted AAPP’s General Secretary Bo Kyi for his response to the complaints from ex-political prisoners he just simply said that AAPP basically is a Thai organization following Thai laws only and they do not need to abide by the Burmese laws and rules.

He even dared the ex-political prisoner group to sue him and his AAPP in Thailand as he knew very well that the Burmese group has no sufficient resources to take such expensive civil action in a foreign land, Thailand.

But most of the 700 odd ex-political prisoners recently released from the Burmese prisons haven’t seen a single Thai Bath as their entitlement benefits promised by AAPP. And now they are a very angry mob and they want their measly little money from the likes of Bo Kyi running the fraudster AAPP.

Despite receiving millions and millions of US$ from multitude of international donors including the United States Government the fraudulent AAPP has never once opened its books to the public and also never ever released a financial statement in its more than twelve year existence as a donor-funded organization while Bo Kyi and his mates are getting richer and richer in Thailand.


And just for that our hero Bo Kyi was even given a Human Rights Defender Award by similar donor-funded institution the Human Right Watch headquartered in New York City. 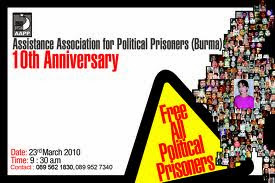