What the 9/11 Commission said does not exist …. EXISTS. "There is no silver bullet or decisive blow that can defeat Islamist terrorism," Lee H. Hamilton, Vice Chairman, Sept. 11 Commission.

It was created  with the "TRUE BELIEVER'' in mind. According to the Koran, Allah states, "Any of my followers contaminated by swine at the time of his death will be denied entry to my paradise forever, I HATE THE STENCH OF SWINE."


The oil is applied to the inside of the barrel of any firearm or weapons system. When fired, BULLETS are coated with SILVER BULLET GUN OIL containing the PIG FAT. The PIG FAT is transferred to anything the BULLETS STRIKE.

SILVER BULLET GUN OIL can be used in or on ALL weapons and weapons systems. Put a drop on the remains of ''suicide bombers'' for the same effect-No Paradise! FOR MAXIMUM IMPACT DOWNRANGE; USE ''SILVER BULLET'' AND MAKE SURE THE ISLAMO-FASCIST COWARDS KNOW IT!

SILVER BULLET IS A TRUE ''FORCE-MULTIPLIER''. Thousands of bottles of Silver Bullet Gun Oil have been distributed since July of 2004 by its creator to members of ALL U.S. Military branches.

Several M1 Abrams tank platoons use '' Silver Bullet Gun Oil'' in their weapons systems. A number of Apache and Cobra ''Choppers'' use Silver Bullet in their "Chain Guns''. Many of Allah's ''HOLY WARRIORS'' have been greatly disappointed upon arriving at the entrance to Allah's ''VIRGINWORLD''.

THIS PRODUCT IS FOR USE ON ARMED MUSLIM TERRORISTS ONLY.

WE DO NOT PROMOTE DISCRIMINATION AGAINST ANY RACE OR RELIGION, ONLY  TERRORISTS. 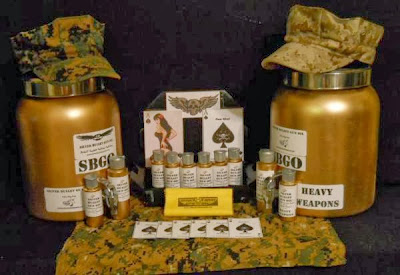