(News articles direct from the Top Conservative News in October 2013.)

Swedish Socialist Party says “white majority is the problem”: The Swedish Social Democratic Workers’ Party is a Socialist/Marxist political party in Sweden. They control only 32% of the Swedish parliament but they control the government.

And like the bloody Socialists everywhere else in Europe and also in United States they rely on the non-white and mainly Muslim immigrant population voting as a bloc for them to win the power. The Pisslamo-Socialists are the so-called new majority-minority.

Now the party has gotten so extreme, they appear to be demonizing white people as official policy. They are now blaming the nation’s problem on the white Swede majority and now actively working to dilute that Swede majority by letting in more Muslim immigrants and encouraging more mixed breeding to brown the population.


Swedish government calls for ethnic cleansing of the native Swedes

There are only 7.7 million ethnic Swedes in Sweden and they have a very low birth rate. The policies of the Swedish Socialist regime will bring about the extinction of the Swedish phenotype.

The extreme far-left Swedish Socialist regime took an unprecedented action that can only be described as the planned eradication of the Swedish as a unique ethnic phenotype. The Swedish government is offering blanket asylum to any and all citizens of the nation of Syria.

Sweden has a population that is less than 10 million, of which less than 8 million are Swedes. However, they have invited a nation of nearly 21 million Arabs to move in. That means Sweden is offering asylum to almost three Arabs for every one of its native Swedes.

The action potentially places the Swedish in a position similar to the American Indians right before waves of European began arriving.

The nation being offered blanket asylum is roughly 75% Sunni Islam. Sweden is already experiencing massive amounts of violence and crime at the hands of the Sunni Muslim who have already moved there. 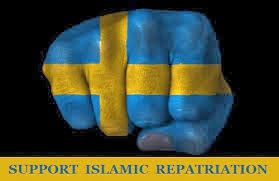 Far-right websites in Sweden are receiving so much traffic they are seven times more popular than the established political parties’ online portals.

The seven most popular far-right websites attract a total of 145,000 unique visitors a day, according to the report, which was prepared by the government-run Socialist Swedish Media Council and handed to the government on Tuesday.

“I’m surprised to find out that (the sites) have seven times more visitors than the total of all parties in parliament,” Ulf Dahlquist, the council’s research director, told Sveriges Radio (SR).

It noted that the extreme left did not enjoy a similar level of popularity, with the two top sites attracting a total of just 3,620 unique visitors a day. Islamist websites are even more marginalized with only about 500 unique visitors each day, according to the report.

Swedish European Affairs Minister Birgitta Ohlsson told SR the finding had to “be taken very seriously. You can never completely immunize a society against anti-democratic and extremist groups that favour violent action. But it’s possible to take a large number of initiatives,” she said. 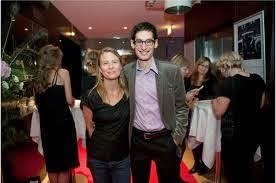 There are 7.7 million ethnic Swedes in Sweden. They are already down to only 80% of the population of their own nation. The Swedes also have a very low birthrate. Mass immigration would mean the genocide of the Swedish phenotype.

As the Swedish government opens the floodgates for immigrants from Arabia and Africa, the ethnic Swedes seem poised to go the way of the American Indian. In fact, the radical left in Sweden now openly calls for the eradication of the Swedes as a distinct people.

Peter Wolodarski, the editor of one of the largest newspaper in Sweden is calling on young Swedes to marry “non-Nordic” foreigners and blend the races. In an anti-Swedish rant, Wolodarski said that Swedes who marry foreigners are more tolerant of letting even more foreign immigrants into Sweden.

Peter Wolodarski is a Polish Jews who is married to an ethnic Swedish woman. His own descendants will never be considered “Jewish” in the traditional sense, because their mother is not Jewish. 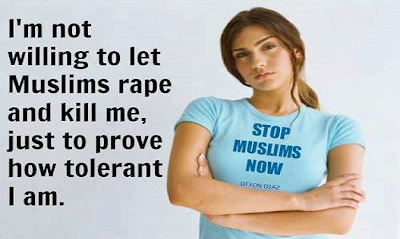 Related posts at following links:
One In Every Four Swedish Women Will Be Raped by Muslim Immigrants
Sweden Collapsing as Muslim Immigrants Wage War Against Swedes
Posted by Hla Oo at 11:56 AM