(The news article direct from the ABC-Australia on November-6 2013.)

A mosque in Cairns in far north Queensland has been targeted by vandals. The front of the Cairns North mosque was sprayed with large red letters early yesterday, calling for the worshippers to "integrate" or return to their "homelands".

Imam Abdul Aziz Mohammed, 81, says he has been involved with the Cairns community for decades and cannot do any more to integrate. "I've lived here in Cairns all my life and this is the first time we've ever seen any physical opposition to our religion and basically our family," he said. "My family's been here since 1900 and I was shocked, to say the least."


The attack has been condemned by local political leaders. The Federal Member for Leichhardt, Warren Entsch, says it is laughable, given the Imam's family has as history in the far north dating back more than a century.

"He's got an accent that's broader than mine and I think as a community we need to be able to get behind Abdul and his community," he said. "They are part of our rich culture, and any suggestion they are anything other than that is an absolute nonsense. It shows you the small-minded minority that we have in this town."

The State Member for Cairns, Gavin King, says it is an isolated incident that does not reflect the views of the community. "I don't think there's a more peaceful, more respectful Muslim community anywhere in Australia," he said.

"The Imam's father moved to Cairns in 1900. If the dropkick who did this vandalism has a longer history in Cairns, I'll walk backwards to Brisbane."

(Cairns is the home town of the “counterjihad” blogger Werner Reimann, or “Sheik Yer’Mami” as he prefers to be known. Back in the day, Reimann did his best to whip up hysteria over plans to establish a mosque in Cairns, urging his supporters to “do whatever it takes” to stop Muslims from “spreading their tentacles” into the area, but to no avail. Reimann’s website, Winds of Jihad, has yet to comment on the graffiti attack on the mosque.)

VANDALS have angered the city's Islamic community by launching a racial attack on Cairns' only mosque. Imam Abdul Aziz arrived at the North Cairns mosque yesterday morning  on his 81st birthday  to discover offensive statements scrawled across the front gate.


The culprits called for worshippers to "integrate" or return to their "homelands". "It is upsetting," Imam Aziz told The Cairns Post. "Why do people do these things? We don't interfere with anybody."

Imam Abdul Aziz was born and raised in Cairns, spent years on various Cairns Show, Rotary and farming committees, represented the city's junior soccer team in 1948 and speaks with a broad Australian twang.

So when vandals used bright red paint to scrawl offensive statements across the front gate of his North Cairns mosque, suggesting he "integrate", the 81-year-old Far Northern Islamic leader was appalled.

"How can we integrate more than what I have done?" he said. "I'd like to know what these people have done for their community. "I was really shocked, surprised, because this was the first time ever that we've had anything done. "It is upsetting. Why do people do these things? We don't interfere with anybody."

Imam Aziz left the Dunn St mosque just after 8pm on Sunday night, but returned early yesterday morning, his 81st birthday, to find the graffiti covering the entire front gate, part of a joining post and the security number pad.

The mosque was completed in 2010, but courted its fair share of controversy when it was initially approved three years prior with a group of residents taking their concerns to court to try and have it stopped amid fears it would ruin the tranquility of the neighbourhood.

A Cairns businessman also launched a campaign on an anti-Islam website which was investigated by the Australian Federal Police to stop the mosque's construction. But Imam Aziz said there were now around 40 families from more than 12 different countries who regularly attended.

He said the neighbourhood had since accepted them and they were also mindful of nearby houses with no loud calls to prayer and only occasional functions to mark special holidays.  This is the first time there has been such a prominent attack, he said, aside from the occasional abusive note shoved through the letterbox which he would normally "just chuck in the bin".

"If you were to ask any of the neighbours there are we a nuisance, I bet you not one of would say so," he said. "Now just about everyone of those people who opposed the building of the mosque is quite friendly."

Dousing further water on the ignorant attack, Imam Aziz's family would be one of the oldest still living in Cairns as his father arrived here on a boat in 1900 to work on the canefields. "My family has never, ever, ever experienced any opposition from this community," he said.

"This is the first time ever. 99.9 per cent of this district have always supported us. It's only that 0.1 per cent of these idiots that do these things."

Division 5 councillor Richie Bates called the vandalism "shameful and disgraceful. Freedom of worship is a fundamental right," he said. "The Islamic faith in Cairns is peaceful and long established and one that has made a positive contribution to our community."

Imam Aziz reported the incident to police early yesterday morning and they are continuing to investigate, although there are currently no suspects. Cairns police Sen-Constable Russell Parker called on witnesses to come forward.


"It's very unusual to see desecration to any place of worship," he said. "As a multicultural society, we should take a very dim view of this sort of behaviour and police are urging anyone in the community with any information to contact Crime Stoppers." 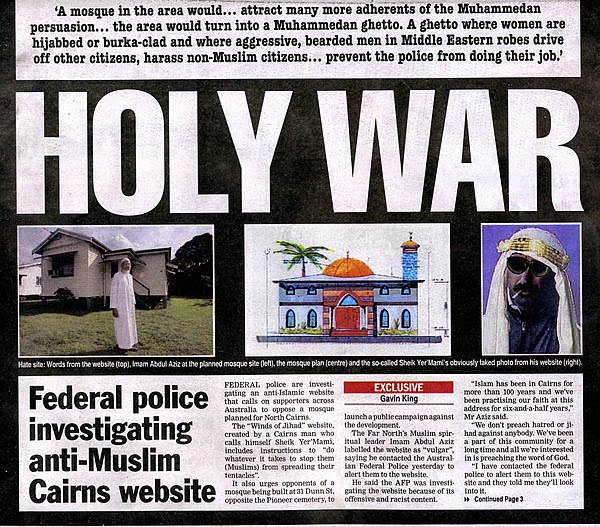 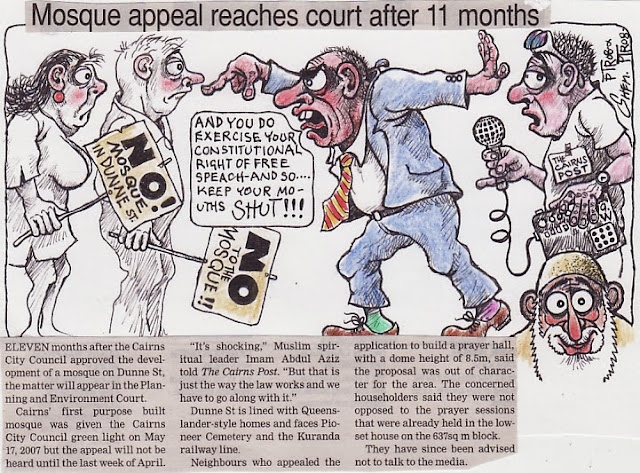