Ironically, General Gun Maw the chief of KIA (Kachin Independence Army) insurgent-army is now in Rangoon to apply for his Burmese passport to visit Thailand and China while a devastating battle between his KIA rebels and Burmese army troops has been raging at Mansi Township in Bamaw for over a month now.

General Gun Maw arrived in Rangoon on a private plane on November-17. Although his KIA insurgents are not officially in any cease-fire or peace agreement with the Burmese government he obviously was allowed to travel freely in Burma with his own well-armed Kachin escorts.

While in Rangoon General Gun Maw had a plan to apply for his Burmese passport, apply for a Thai visa, do a press conference, and meet various groups of ethnic Kachin activists living in Rangoon and nearby townships.

In bad old days if any KIA/KIO officers wanted to meet other friendly insurgent groups down south in Burma they had to go on foot through thick jungles on the mountainous border land   risking their lives and limbs from the various hostile insurgent groups and drug-trafficking groups in the jungles along their way.

But just recently any KIA/KIO officers travelling to meet other insurgent groups down south in Burma had to go through China as China started helping them both politically and materially. They normally travelled by luxury SUVs to Kunming the capital of neighboring Yunnan Province.

And from Kunming they flew either First or Business Class to Bangkok and then Chiangmai in Thailand. Once in Chiangmai, which is basically an open city for all Burmese insurgents and exile groups in Thailand and the nearby borderland, they could freely see whoever they wanted as Thais consider all Burmese exiles and insurgents there as their strategic allies.

But times seem to have changed as Thein Sein’s Government has now granted special privileges to General Gun Maw for some obvious reasons. President Thein Sein and his ministers want General Gun Maw to be on their side even though Burmese army under General Min Aung Hlaing is waging a war on KIA on Chinese border. My question is why and the answer is quite obvious.

Compared to former KIA Chief General Gam Shaung now sidelined somewhere behind in China General Gun Maw is well known to be one of the moderate KIA officers who are willing to live peacefully together with other ethnic groups in Kachin land, mainly Buddhist Shans and Burmese.

And he also is a clean KIA officer with no blemishes as a murderer and rapist unlike many other KIA officers like General Gam Shaung who are known to harbour un-controllable natural hatred for the Buddhist people living in their homeland Kachin State.

On November-18 KIA General Gun Maw gave a press conference at 3 pm in Rangoon’s Business Alliance Hotel to various local and foreign media groups. He appeared to have been given by the government a chance to talk freely to the media.

At the press conference freely talked about the ongoing peace negotiations with the government, KIA’s position on the controversial Myitsone Dam, the present situations on the raging battles between KIA forces and the government troops, the situations of war-refugees in Kachin State, and Daw Aung San Suu Kyi’s stance on Burma’s ethnic affairs.

He also frankly admitted in an answer to May Thingyan Hein a woman journalist from Myitmakha Media Group that his KIA has many child soldiers among its troops. He also added that they are now finding the ways to return them back to their parents.

KIA Chief General Gun Maw also visited US Embassy in Rangoon and met Ambassador Derek Mitchell in the early morning of November-19. According to U Dawn Khar the spokesperson of the KIA Advisory Team the meeting began at 8:30 and lasted more than an hour.

“There definitely was a meeting with Ambassador Mitchell at US Embassy. About one hour. General Gun Maw was just reporting the update on the peace process going on right now between us and the army. I cannot say much on the details as the appropriate diplomatic etiquette demands that we do not disclose the discussion,”  said U Daung Khar. 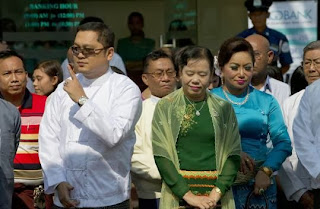 Also on November-19 KIA Chief General Gun Maw cordially met U Tayza the richest man in Burma and a multi-billionaire. They were basically talking about Tayza’s various businesses in Kachin State.

Tayza’s companies are known to have owned agro-businesses and large-scale plantations in Northern Kachin State and also various jade mines in Pharkant District. Tayza has so far provided General Gun Maw and his large entourage with many luxury SUVs to travel in Rangoon.

As a bitter protest against Aung San Suu Kyi’s so-called silence on the raging civil war in Kachin State the KIA Chief General Gun Maw has so far refused to meet the opposition leader and famous Nobel Laureate.


“So far Daw Aung San Suu Kyi hasn’t said much on our ethnic affairs, but we expect she must have thought about that a lot and have many plans for the future. And we believe she will eventually say of her thoughts and plans when she thinks the time is appropriate,”  commented General Gun Maw at November-18 press conference in Rangoon.


Under his standing orders all KIA-affiliated overseas-Kachin groups have boycotted all Aung San Suu Kyi’s overseas meetings with Burmese nationals abroad and even protested against her during her frequent tours of European countries.
Posted by Hla Oo at 12:14 AM