The popular woman MP had come to see Shin Wirathu to report about current political scenes in and out of Hluttaw (Burma’s Parliament) and also the current updates on the 969-Buddhist-Movement sponsored law the Buddhist Women’s Marriag Act (Ah-myo-zount U-pa-day) at the Parliament.

In return Shin Wirathu had instructed her to continue on with her and her NDF Party’s tireless efforts till the crucial Buddhist law will be submitted to the Parliament and debated and then passed. Shin Wirathu also donated one million kyats to her NDF Party as his support to strengthen NDF’s nationalist-patriotic activities in protecting Burman race and Buddhism and Burmese culture.


The National Democratic Force (Burmese: အမျိုးသား ဒီမိုကရေစီ အင်အားစု , abbreviated NDF) is a Burmese political party formed by former members of the National League for Democracy (NLD) who chose to contest the 2010 general election in Myanmar (Burma) while Aung San Suu Kyi-led NLD had boycotted that election.

The opposition National Democratic Force (NDF), which split from Suu Kyi's party in order to contest the vote, had gained a total of 12 seats in the legislature's two chambers after 2010 General Elections.


By re-aligning themselves along the line of Shin Wirathu’s and 969-movement’s populist Buddhist-nationalist anti-Muslim stance the NDF is obviously aiming to grab a substantial number of parliamentary seats from both ruling party USDP led by President Thein Sein and the main opposition party NLD led by ASSK in 2015 General Elections. 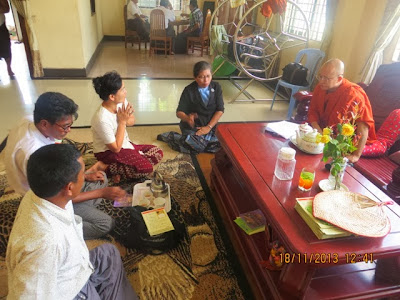 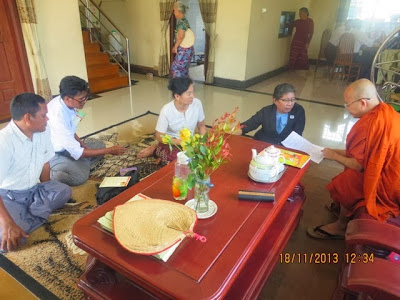