In just three months since the end of raining season more than a thousand ethnic-Buddhists fleeing the widespread genocide of Buddhists in Bangladesh have crossed into neighbouring Arakan and they have been given temporary residency permits by Burmese Government.

Just on October 15 alone sixteen Buddhist families of more than 50 people crossed the Burma-Bangladesh border. They were originally from the Ywar-daw Village by India-Bangladesh border and they are now temporarily taking refuge in Central Buddhist Monastery in Maungdaw Town.

“Right now they urgently need blankets, mosquito-nets, flannels, cooking pots & pans, and kitchenware. Very soon they will be moving into new houses now being built for them in Aung-thar-yar model village,”  said Buddhist Abbott of the Maungdaw Central Monastery.


Just recently Burmese authorities has issued temporary residency permits to about 700 Bangladeshi Buddhist refugee who are older than 12. That allows them a three year probationary stay in Arakan and if they abide by Burmese laws and are of good character they will be granted permanent residency at the end of that three years.


“We each were issued Temporary Residency Permit as MDW-IP after thorough examinations by Burmese Immigration officials. If we want to travel outside of Maungdaw Township like going to Sittwe or Rangoon we can go with a permit from District Immigration Office. We were issued temporary stay permits in last September,” explained happily a Bangladeshi-Buddhist refugee now living in Kha-yay-myaing model village near Maungdaw Town. 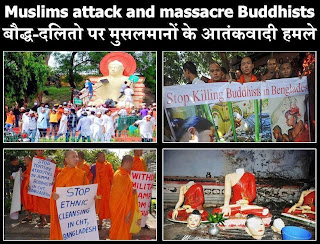 The widespread genocide of Buddhist-ethnics by Bengali-Muslim settlers supported by Islamic Bangladeshi Army has caused more than 200 Buddhist families of at least 1,000 people to abandon all they had in Bangladesh and enter Burma’s Arakan in this winter season alone.

At present Maungdaw District Administration and local Buddhist groups have provided the Buddhist refugees with foodstuff and other essential supplies. Each refugee family of Bangladeshi-Buddhists is given a brand-new house in a new model village and about ten acres of good paddy land to work on and also provided with good paddy seeds and fertilizers.

Maybe the recent burning of Muslims and their mosques and madrassas in Burma's Meikhtilar will encourage Muslims to leave Burma like the frequent Islamic-pogroms in Bangladesh are the incentives for Buddhists there to leave Bangladesh.)
Posted by Hla Oo at 1:59 AM