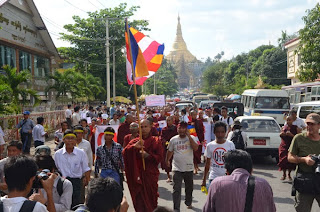 As part of pre-emptive strikes against the OIC delegation’s November-14 visit to Burma a massive walk-down protest from the East Gate of Shwedagon Pagoda to the public square by the Rangoon City Hall and Sule Pagoda is now going on in Rangoon.

According to the Chief Abbott of Magway Pariyatti Teaching Monastery Sayadaw U Par-mouk-kha the march began at 2 PM today November 12 as the permissions for the march were already granted by the respective police stations if Bahan and Kyouktadar townships.


More than 100,000 lay people and Buddhist monks (Thangars) are participating in today march against OIC delagation’s November-14 visit to Burma. 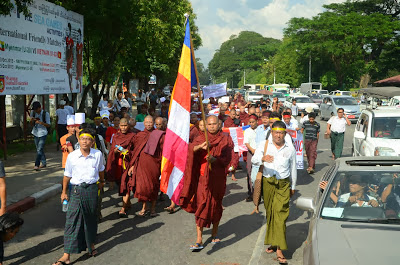 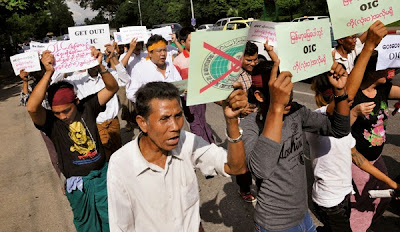 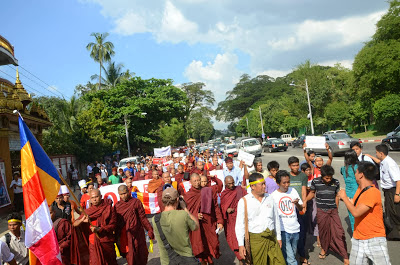 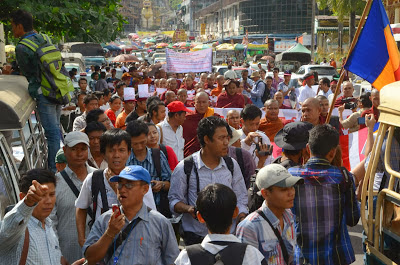 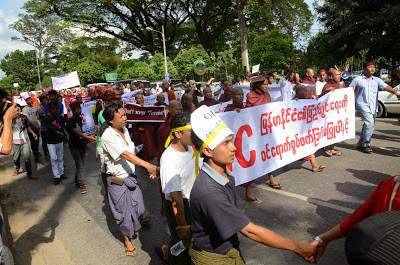 After persistently refusing to grant OIC an official visit last two years Burma’s Thein Sein Government finally had to allow one as international pressure including constant pushes from Ban Ki-moon the UNSG.

OIC delegation’s planned five-days Burma visit will include two days in troubled Arakan (Yakhine State) on 15 and 16 November. OIC General Secretary said in his statement that the visit was planned at his last September meeting with Ban Ki-moon at UN concerning OIC calling for Rohingya Emergency Resolution at UN Security Council currently presided by Australia.

President Thein Sein Will not Meet OIC, But ASSK Will?

Burmese government has already confirmed that Wunna Maung Lwin the Foreign Minister will meet the OIC delegation but Thein Sein will not receive them.

Burma's prime minister is a devout Buddhist and also receiving the high level islamist delegation from OIC the Mulitinational-Muslim-Mafia is a very hgih risk activity for a Buddhist politician and the president of Buddhist Burma.

Many Burmese especially the monks leading the 969-movement and the Race and Religion Protection Groups (Ah-myo-zount) have been really worrying about NLD’s recent push to rewrite the 2008-Constituion and 1982 Citizenship Act.

Especially the recent appointment of the prominent Muslim leader and a High-Court lawyer Ko Ni as the Chairman of the NLD Committee for Rewriting of Burma’s Constitution.

Ko Ni was born of Bengali-Muslim father Sultan and Bengali-Muslim mother Halimar in Kalar-chaung Village of Kathar District. He was recently promoted to prominence since ASSK has been giving many Muslims important positions in her party NLD.


Ko Ni will be the leading NLD figure in welcoming the OIC delegation and he and ASSK are widely expected to discuss with OIC delegation the rewriting of Burma’s new constitution and the repeal of 1982 Burma’s Citizenship Act the only legal obstacle in granting the millions of illegal Bengali-Muslims the so-called Rohingyas waiting on Burma-Bangladesh border. 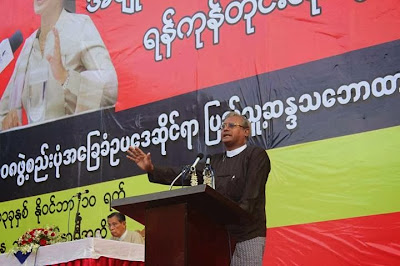 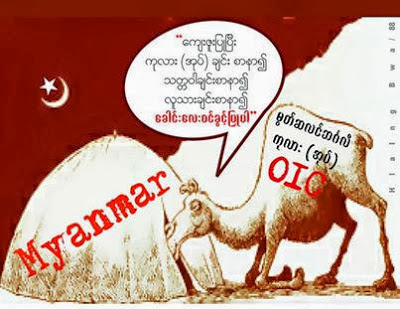