Islamophobia: A Type Of Racism? Nope! 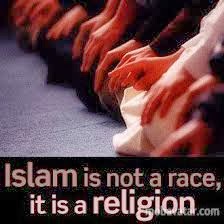 Islamophobia: Can it be Considered a Type of Racism? The word of the day recently seems to be this “Islamophobia” term that is being thrown around talk shows and biased news networks.

It’s a useful term. With it you can drown people’s voices out when speaking out against Islam, drown them with the social pressures of being labelled racist and ignorant. It acts as a big stick you can hit people with the second they question the ever loudening oppressive voice of Islam.

However I am pleased to see that people are no longer intimidated by the ridiculous accusation of racism as Islamophobia is on the rise, but instead of observing and pondering its flourishing number many media outlets prefer to name ignorance and racism the fuels of the anti-Islam fire.


Somehow it is so much easier and fluffier to label mass numbers of Europeans, Americans and educated scholars racist than it is to ask why it is only Islam that is getting it in the neck and not other religions.

I’m Not The First To Ask This And I Won’t Be The Last But...What Race Is Islam? 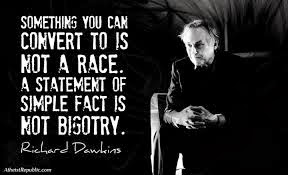 It’s not a race. It is a belief, a nefarious iron-handed belief and a white Muslim is held no higher or lower than an Arabic Muslim. It is not the skin colour we’re worried about. Skin colour does not blow up girl’s schools or drop deadly chemicals on people. Violent fascist ideologies do.

Do you honestly think that the highly intelligent Hitchens (he is missed) and Dawkins are the “racists” that the term would have you believe? Of course they’re not. Neither am I and probably neither are you because you are reading this right now and we all know that most racists do not possess the capacity to read.

And yet Islamophobia is still relentlessly tagged as racism despite many of us trying to explain this very simple reasoning. It seems some people would rather close their ears and scream “racist” in an annoyingly high pitched tone the second you criticise Islam’s actions.

Perhaps the guilt we feel for several hundred years of persecution performed by the white Western world clouds our perspective and compels us to hold certain Asian ideologies in higher regard than they deserve in the hope of atoning for previous atrocities.

Now, I am a liberal-minded man myself as many atheists are, but this “Let’s not have a go at Islam because most of its adherents are Asian” mentality is nothing but lefty liberal bollocks gone completely mad and out of control.

If you actually take the time and learn about Sharia’h you’ll know that it is not something you would want enforced upon you but may very well be, as long as those who speak out against it are incorrectly and unfairly designated as racists.

So please try and learn this to save you looking like a liberal loony. Islam = Not A Race therefore Islamophobia = Nothing To Do With Race. 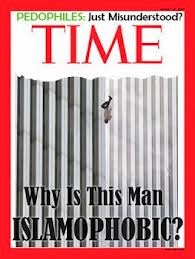 All phobias are unhealthy because the term itself suggests irrationality but some phobias are perhaps more justifiable than others. For example arachnophobia; fear of spiders is something that I can understand because not only are they fearsome-looking little critters they can actually hurt you.

Arachnophobia is particularly common, accepted and even respected. However 95% of spiders in this world could not hurt you even if they wanted to- only about 5% of them could really fuck your day up; the wandering spider and the funnel-web spider could actually do a lot more than that.

So with only 5% of spiders posing any threat to humans, I wonder at what point it becomes acceptable to be afraid of something without facing ridicule. People say that most Muslims are non-violent and that it is just a small percentage who want to enforce Sharia’h law and turn the entire Western world into an Islamic state and I ask them how small a percentage is it? 10%? Only 5% maybe?

5% of 1.6 billion is still 80 million people looking to take away freedom of speech and life, which is exactly the purpose of Sharia’h law. And I do not think it is 5% of Muslims who aspire to a global Islamic domination; actually I’m going to tell political correctness to go fuck itself and say I think the percentage is considerably higher than that.

And getting back to my spider comparison, I don’t think venomous spiders could teach non-venomous spiders how to become dangerous to humans, but with Islam, extremists can maliciously target moderates using guilt and carefully chosen passages from the Quran to turn a relatively peaceful man into a violent danger to civilisation.

I am pretty sure spiders throughout the entire expanse of human history have not killed as many people as Muslims have in the past year. So if fear of spiders is justified, then so is fear of Islam.

And even on his worst day, a spider with homicidal, psychopathic tendencies and an all-consuming faith-inspired desire to kill all non-spiders because he thinks that is what the spider god Arachne wants from him, could only kill one person with his bite; it is not like he could hijack a plane with like-minded spiders and fly it into a building killing thousands instantly.

What Happens When You Criticise Islam 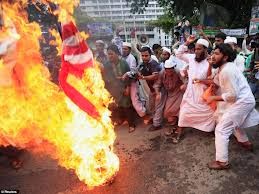 I mentioned earlier that I think the percentage is higher than 5%. Now let me explain why I think it is. When the Jyllens-Posten newspaper printed pictures of Muhammad in 2006 the Islamic world lost its mind and staged global protests and riots.

Due to the extreme aniconism practiced in Islam, the drawings in question caused deaths and incalculable damage, as the Danish government came under heavy attack. Here is the short version of the Islamic response...

“We deplore these statements and publications and urge Your Excellency's government to take all those responsible to task under law of the land in the interest of inter-faith harmony, better integration and Denmark's overall relations with the Muslim world.”

This to me, when considering Denmark’s censorship law that has been in place since 1849, does not sound like a healthy relationship at all but rather a bully muscling its way. Following this there was a judicial investigation of Jyllens-Posten but it rightly turned to nothing when the magic words that Islam hates and fears “freedom of speech” were uttered.

Flag burnings not just of Denmark but of France, Norway and even Switzerland were fairly commonplace. Protests, rallies and riots were held across the globe in response, resulting in over 200 deaths and massive damage to several Danish embassies across the world, including a big one in London, and Christians and churches were also viscously attacked in some of the Muslim-majority regions.

Three high profile national ministers lost their jobs in direct response to this crisis; Roberto Calderoli, Laila Freivalds and a Libyan interior minister. And speaking of ministers, in India, Haji Yaqoob Qureishi, a minister in the Uttar Pradesh state government, announced a cash reward for anyone who beheaded "the Danish cartoonist" who caricatured Mohammad.

There was an Arab states boycott not just against Denmark but against many European countries resulting in major losses for some companies. Arla, Denmark’s biggest exporter to the Middle East, lost a staggering 1.3 million Euros per day during the early stages of the boycott. The BBC reported the end cost to Danish businesses was 134 million Euros.

The cartoonist, Kurt Westergaard, was physically attacked repeatedly and was nearly murdered in his home by an axe-wielding madman who shouted “we will get our revenge,” but Westergaard managed to lock himself in his panic room and now lives under police protection. In 2010 three men were arrested for the planned terror attack against the newspaper firm and in 2013 in the United States a further two men were arrested for the same charge.

This globally staged riot was not the work of “a few bad apples”. 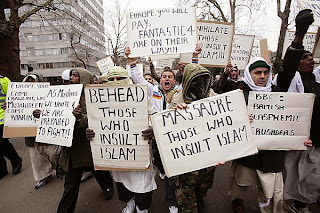 As I said this was a short list. Feel free to look into the Jyllens-Posten controversy yourself and you’ll see that I left most of the stuff that happened out. All this violence, all this death and destruction for a quite poorly drawn, mostly mundane cartoon about the Islamic prophet, done by a little known paper in quiet Denmark.

However when the US’ Family Guy shows Christ as a fraud conjurer, a sexual miscreant, and a gun-toting badass what happens?  ...Nothing!

Nothing happens, no protests, no death, no violence...Nothing. So please don’t say all religions are the same because they are not; they all might be batshit crazy but only one will try and kill you if you question it, and that is why Islamophobia is on the rise.

The Jyllens-Posten controversy was just one of many; there are countless other examples of Muslims going mad and staging planet-sized protests and riots when someone criticises their religion...

The list goes on and on and it seems to me that the Muslims are peaceful enough until you disagree with them.

Why Is There No Hinduphobia? 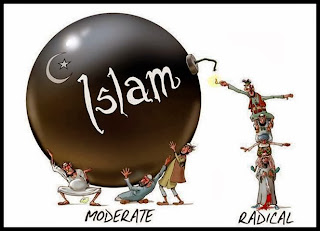 The usual comeback to this is you can’t judge all Muslims by this “one action” but the problem is that this is not a one-off incident, is it? When can we start judging the faith by the actions of those who follow it?

Literally everyday you can read about something blowing up in the name of Islam. When do a few cases add up to a lot of cases that give cause for concern? I want to know what more Islam needs to do before it is recognised as a violent religion.

There are about 2.5 million Muslims and roughly 1.5 million Hindus in the UK with Hindus being the second largest minority group in the country, yet there is no such thing as Hinduphobia. Why do you think that is? Are racists that picky?

Not to be too crass here but the usual skin tone of the stereotypical follower of the two religions is quite similar isn’t it? If Islamophobia is the child of mindless racist Westerners, surely Hinduphobia should exist as well? Yet it doesn’t and wherever you sit on this fence, why don’t you think about why it doesn’t.

(James Lawrence was born in Plymouth, a city in the South West of England. Being an animal lover all his life he is very big on animal rights and when he sees cruelty to animals it invokes a rage in him that can only be quelled by copious amounts of tea and video games.


He has been an atheist since he was twelve but was never a very good Christian even as a child he questioned God’s methods and found it all very boring and gloomy. He is a frustrated writer waiting for his big break and loves all forms of writing; blogs, comic books, novels, you name a form of writing and he’ll whip you up a story with as much sex, violence and blasphemy as you can take! He currently lives in Finland with his wife and two cats!)
Posted by Hla Oo at 10:40 AM