(News article and photos direct from The Reuters and other sites on January 10, 2014.)

These were exported to Japan and Taiwan for further rearing. The main cultured species is Japanese eel, Anguilla japonica. The exact position of the spawning area of this species is still unknown, though it has been established it lies somewhere south of Taiwan.

With rapid and very profitable development of industry, the domestic demand for edible eels has grown significantly, the eel culture has grown in Korea not only for seeds but also the marketable size product.


From that time, eel culture expanded considerably in Korea. The eel production of Korea was about 5,000 tons in 2005 alone. The success of eel culture is depended on the natural resources of elvers.

The demand of elvers is increasing among three East Asian countries, Korea, Japan and China and it makes the value of elvers very high. Some farmers use European elvers and North-American ones instead of the East Asian elvers. Even the Korean National Fisheries Research and Development Institute has started to study the production of elvers artificially in lab or forvies.
A "goldrush" for Maine's baby eel fishermen

(Reuters) - George Forni will spend most of next week holed up in his home in Sullivan, Maine, guarded by a new surveillance system and armed with a stun gun and pepper spray as he buys live baby eels from neighbors for thousands of dollars.

May 31 marks the end of what has become a gold rush for a small group of Maine fisherman - the 10-week season for catching juvenile eels, known as elvers, whose price has increased nearly a hundredfold over the past decade.

Dealers in Maine are paying $2,300 a pound for the thread-like creatures - more than double last year's price - and Forni is so awash in cash from catching elvers and buying them from other fisherman on behalf of a dealer that he has ramped up his home security.

"This year for two and a half months is better than any three years I've ever worked in my life," said Forni, 53. He said he paid off all his debts and bought a new $51,000 pickup truck with a portion of this season's windfall.

"All of a sudden it's a gold mine. China wants them that bad, and we're the only place that can get them," said Forni, who spends the rest of the year cutting sod and plowing snow.

High prices are fueling a boom in poaching and raising concerns that the American eel population, already at its lowest level since the 1950s, will dwindle further. Driving prices has been an eel harvesting ban in Europe amid concerns about overfishing, disruption to supplies caused by last year's tsunami in the Pacific and strict catch limits on elvers in the U.S.

Maine, which this year issued 407 licenses - down from 2,207 in 1996 - and South Carolina, which issued 10, are the only two states that allow baby eels to be harvested. Last week, Maine's Passamaquoddy Indian tribe, which has the authority to issue fishing licenses to tribal members, announced that it would begin granting licenses for elver fishing, with 236 to be available.

It can be the proverbial license to print money. From a single net placed at a river mouth, Forni has earned as much as $12,500 in a single night. The eels he catches are flown to China or South Korea, where they will be raised for several years in fish farms, which need a constant supply of juveniles from the wild because eels do not reproduce in captivity. Once mature, many will be sent to processing factories where most will be roasted and sold in Japan at sushi bars.

The price spike may push elvers past softshell clams and Atlantic herring to become Maine's second most valuable fishery after lobsters this year, according to state data. Last year elvers accounted for $7.6 million in revenue, or an average of $18,673 per licensed fisherman.

This year those numbers will be far higher. "We've had reports of people making over $100,000 over two or three days when they're getting them right," said Sergeant Rob Beal of the Maine Marine Patrol.

It's grueling work typically done at night or in the pre-dawn hours before high tide, when elvers are washed up the river mouth. Fishermen don rubber boots, rain suits and headlamps, and use either a tubular net left in the water or what looks like an oversize butterfly net, which requires hours of scooping to pull elvers from the water.

The good times may not last for long. Dams, fishing and pollution have all contributed to a decline in the estimated Atlantic eel population in recent years, raising concerns about a fish with a reputation for resilience.

Offshore catches of adult eels have declined from more than 3.5 million pounds in the 1970s to less than 1 million pounds today, according to the Atlantic States Marine Fisheries Commission. The U.S. Fish and Wildlife Service is studying whether to place eels on its endangered species list.

American eels spend most of their lives in rivers and estuaries but travel to the Sargasso Sea near Bermuda to spawn. Eggs float to the surface and are carried for a year and a half by currents to river mouths stretching from Greenland to Brazil. Larval eels begin swimming upstream to rivers and lakes, where they spend eight to 20 years growing to sexual maturity.

"They can survive through a lot, that's why seeing declining populations is of particular concern because they can be a bellwether for environmental systems," said Kate Taylor of the Atlantic States Marine Fisheries Commission. Unfortunately, she said, environmental groups tend to rally around species that are considered cuter than the snakelike eel.

It's during the larval stage when the elvers are most valuable. Yet getting in on the harvest legally isn't easy. Most of Maine's elver licenses are held by those who have fished for the eels for years.

Even those with licenses are limited to two tubular nets and one butterfly-style net and are banned from fishing two days a week. That's led to a big uptick in poaching. Officers with the Maine Marine Patrol say they issued more than 200 citations in the first 52 days of the season. With fines for many violations ranging from $100 to $500, however, that may not be enough to discourage illegal elver fishing.

One beneficiary of this year's boom is South Shore Trading, a company that exports elvers to China from a warehouse guarded by a police cruiser near the Portland, Maine, commercial fish pier. Company manager Mitchell Feigenbaum said government research on declining eels stocks overstates the problem because it is based on catch data of adult eels offshore.

"There are massive amounts of eels in other areas where there is no fishing taking place," he said. "You can't take hundreds of people out of work just because you want to restore the population back to where it was at some distant time. The eel fishery sustains itself."

In the meantime, competition among elver fishermen is fierce in prime locations. Michael Murphy, 63, of Old Orchard Beach, Maine, has been catching elvers for 25 years along a river in southern Maine. Murphy, who collects scrap metal the rest of the year, sat out last season after having surgery for cancer and lost his prime location near a highway underpass.

"I snoozed, I losed," Murphy said, after asking that the location not be disclosed.

His spot was taken by Lester Toothtaker, 50, a clamdigger from Hebron, Maine. On a recent day, Toothtaker arrived at the river 10 hours before beginning fishing to claim his position. This year the interest in elvers has grown exponentially, he said, with dealers even showing up in the middle of the night to call out prices as he fishes.

After a decade of research, Korea has produced individual glass eels for Japanese eel aquaculture. Although Japan also has this technology, its production of seed is not enough to meet external demand.

After a decade of research, Korea has produced individual glass eels for Japanese eel, Anguilla japonica, aquaculture. Although Japan also has this technology, its production of seed is not enough to meet external demand. Despite dependence upon the wild seed, Japanese eel aquaculture production has been growing significantly and comprises over 27% of Korea’s freshwater aquaculture. To aid further development, a series of studies by the authors defined optimum nutritional requirements and sustainable feed formulations for the eels.

Freshwater aquaculture in Korea is dominated by Japanese eels, Anguilla japonica, followed by carp, Amur catfish, rainbow trout, pond loach and tilapia. Over 27% of Korea’s freshwater aquaculture is supplied by eel production due to historical high demand in domestic as well as overseas markets, especially in Japan.

Due to the limited availability of wild seed and a lack of standardized seed production technology, eel aquaculture is a challenging industry. Despite the lack of a complete package for eel aquafarming, aquaculture production grew from a negligible volume of 100 mt in 1971 to 7,257 mt in 2011. With success in developing glass eels, a growth phase between larvae and juveniles, eel production is expected to further expand.

In the beginning, eel culture in Korea was limited to the collection of seed from rivers that was grown to produce fingerlings for export to Japan and Taiwan for further rearing. Now, Korea raises Japanese eels not only for fingerlings but also for growout to marketable sizes.

Favorable government support and research that includes the growing experiences of farmers have enabled Korea to build a strong foundation for eel aquaculture. Rising production reflects improvements in capturing and transporting glass eels, as well as stocking and feeding for maximum yield. 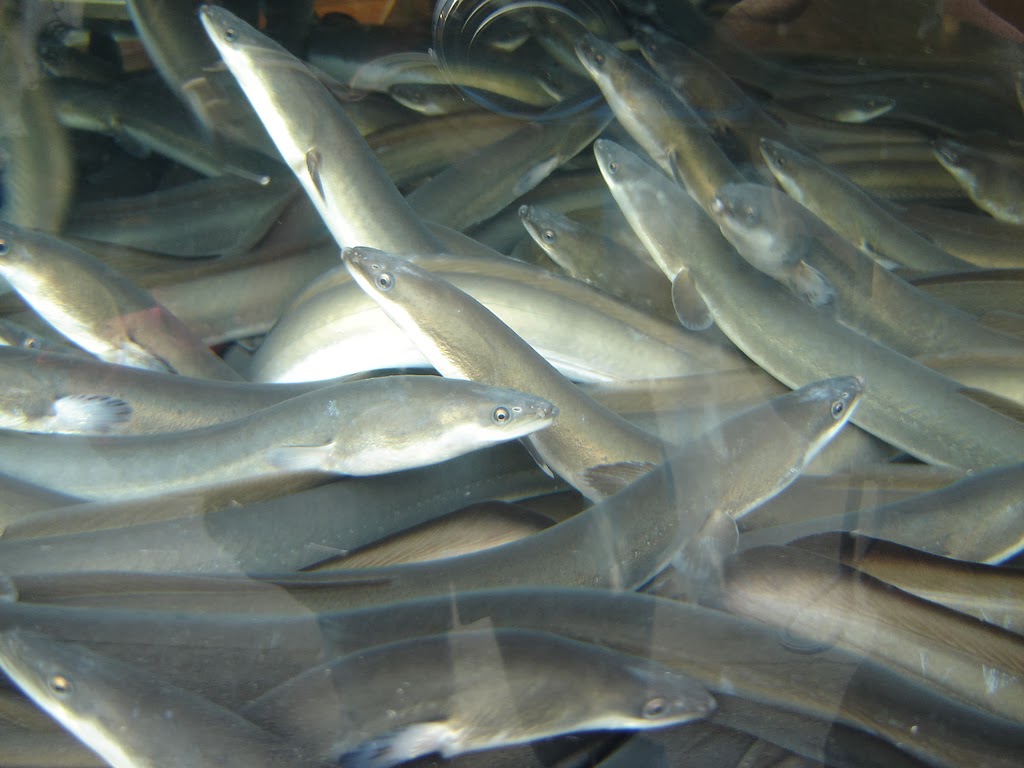 Government policy to protect freshwater resources in 1997 directed the majority of inland farms to terminate culture, so eel aquaculture subsequently moved to indoor systems. A total of 236 flow-through and recirculating eel farms covering an area of 132 ha has been reported.


Indoor systems for eel farming adopt ongoing improvements in methods and equipment for greater efficiency. Flowthrough systems with concrete bottoms are being replaced by circular polypropylene tanks. Tanks ranging from 30 to 300 m2 in size are employed based upon the life stages of the Japanese eels.

Although Japan has developed complete aquaculture technology for eels, its recent annual production of 150 to 200 individuals is not enough to meet external demand. In Korea, Pukyong National University initiated research on Japanese eels in 2002 and achieved success in fertilizing eggs.


After a decade of research efforts, Korea has finally produced two individual glass eels for aquaculture. Korea should soon have a complete aquafarming package for eels and begin to play a greater role in global eel production.

(Blogger's Notes: The ridiculously high price for American baby eels could be an incentive for us Burmese to start local eel farms in Burma as the extremely-muddy Irrawaddy Delta where I grew up is a perfect place for eels to thrive in wild and they definitely do as I had seen with my own eyes. Eels are everywhere in our Irrawaddy Delta. 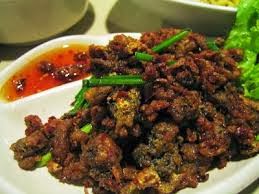 They are so abundant that some Burmese even refuse to eat them except in Chinese restaurants. One mouth-watering popular eel dish I still remember is "Nga-shint-chout-sart" the dish of dried-eel-fillets fried with chili, lime, onion, garlic, and fish-source. Yummy!!!!

So what my compatriot Burmese need to do is just scoop them elvers out of water and farm them or just gather the adult eels and export them to Korea and Japan. Maybe my advice is already too late as some Burmese entrepreneurs might already be exporting their cheap and plentiful eels to Japan and Korea by reefer-container loads.)