One of fourteen Royal Australian Navy’s Armidale Class Patrol Boats HMAS Childers has docked at Thilawar Deepsea Port in Rangoon today January-20 at about 8 in the morning for her four days visit to Burma.

The HMAS Childers with a crew of 2 officers and 25 sailors arrived at Rangoon as a Friendly Ship Visit and also the very first historic visit by a RAN warship.

According to Burma Navy HMAS Childers is leaving Rangoon on January 24. At Thilawar Dock the Australian patrol boat was cordially welcomed by the senior officers and sailors of Myanmar Navy.


The four days itinerary of the Australian crew of HMAS Childers will include visit to the Burma Naval Training School at Than-hlyet-soon, extensive tour of Rangoon City and its nightlife, and friendly sports matches with Myanmar Navy personnel.

The main roles of the Armidale Class patrol boats in RAN are surveillance and the apprehension and escort to port of vessels suspected of illegal fisheries, customs or immigration offences.

Armidale Class patrol boats were commissioned and built for the Royal Australian Navy to provide naval support for civilian authorities in missions such as fisheries protection, custom patrols and in protection against illegal immigration.

The Armidale class patrol boats were introduced to replace the 15 Freemantle Class large patrol vessels that entered service between 1980 and 1984 and approaching the end of their operational life.

The construction of the first of class HMAS Armidale (83) began in May 2004. Armidale was launched in January 2005 and entered service in June 2005. The other ships of the class are:

The boats operate in Australian waters in the northern exclusive economic zone and in latitudes up to 50°. The two additional Armidale Class patrol boats (Maryborough and Glenelg) are separately based in Australia's north west to defend oil and gas assets.

The Armidale Class patrol boats are of conventional welded aluminium alloy construction with a semi-displacement vee hull. The design and construction meets the commercial standards of Det Norska Veritas Rules for high-speed light craft and the standards specified in the navy maritime materiel requirements.

The boats have Seastate active ride control with hydraulic stabiliser fins and stern trim tabs. The hull is 56.8m in length and the displacement is 270t. The stern deck accommodates two Zodiac 7.2m waterjet boats.

The main roles of the Armidale Class are naval support of civilian authorities in missions such as fisheries protection, custom patrols and in protection against illegal immigration. Missions are expected to be typically of 21 days duration. At a cruise speed of 12kt, the patrol boats have a range of 3,000nm with a fuel reserve of 20%.

The boats, which operate with a crew of 21, will be multi-crewed allowing a high annual usage. There is accommodation for 20 additional crew members.

The trials have proven the boats' sea-keeping characteristics in high sea states which exceed the performance requirements.

The vessel is armed with a Rafael Typhoon 25mm stabilised naval gun mount with an ATK Bushmaster cannon. Fire control is provided by a Rafael Toplite multi-sensor optronic weapons director. The gun has a traverse range of ±20° and an elevation of -12.5° to +40°30'. The gun has a stabilisation accuracy of 0.2mrad.

"The main roles of the Armidale Class are naval support of civilian authorities."

The line of fire stabilisation allows hostile targets to be engaged with precision in high sea state conditions and at appropriate stand-off distance. The gunner can choose to operate the gun manually or automatically. The ship also carries two 12.7mm machine guns.

The Armidale Class patrol boats are equipped with low-light optical surveillance and a Bridgemaster E radar operating at E, F and I bands.


The Armidale Class boat is fitted with two MTU 16V 2,320kW diesel engines with ZF transmission systems, driving twin screws. In 2007, the fuel system design was modified with the addition of coalescers to prevent water contamination of the fuel system. There is a 160kW bow thruster. 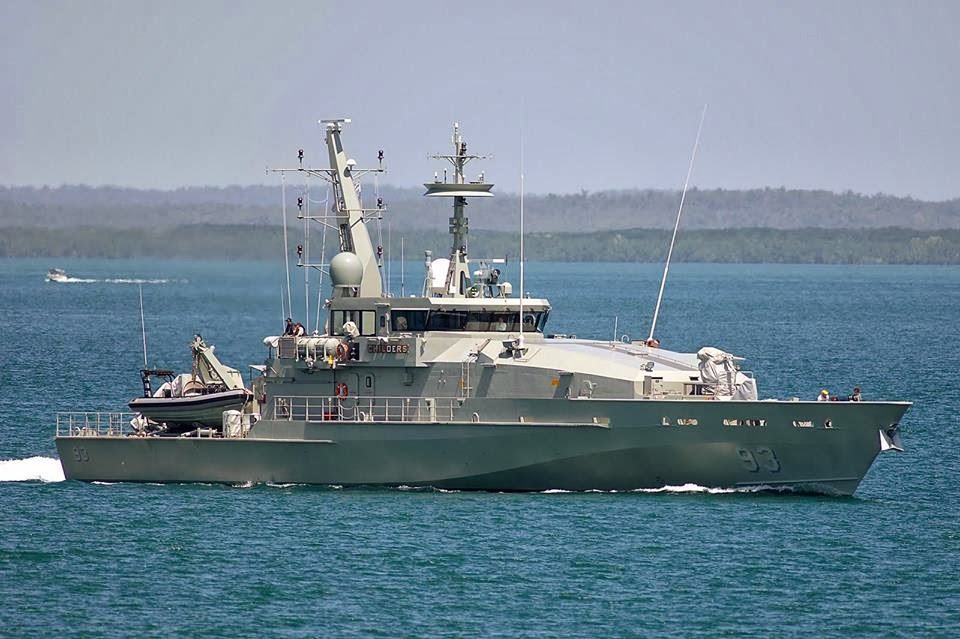 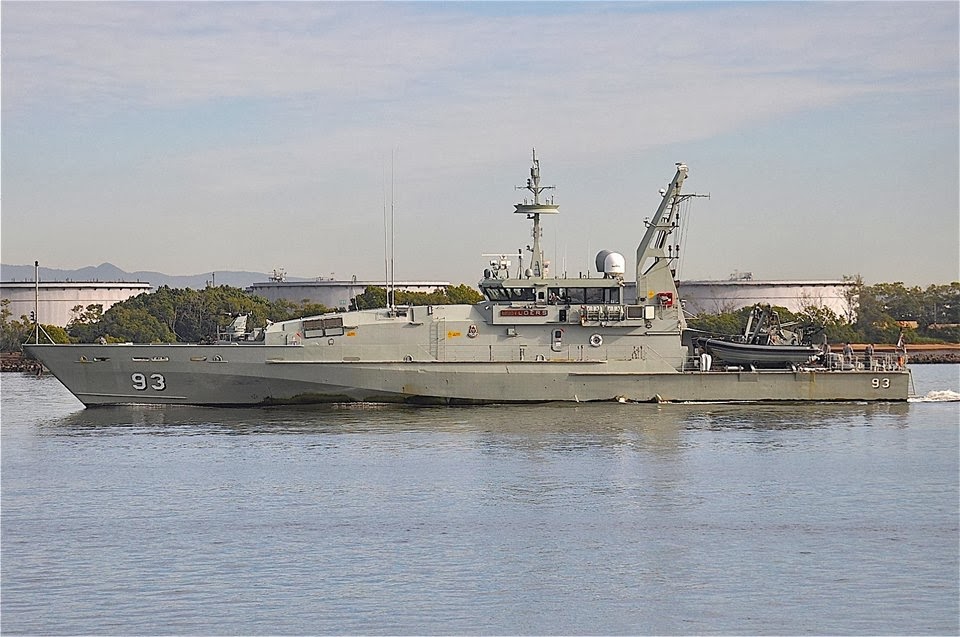 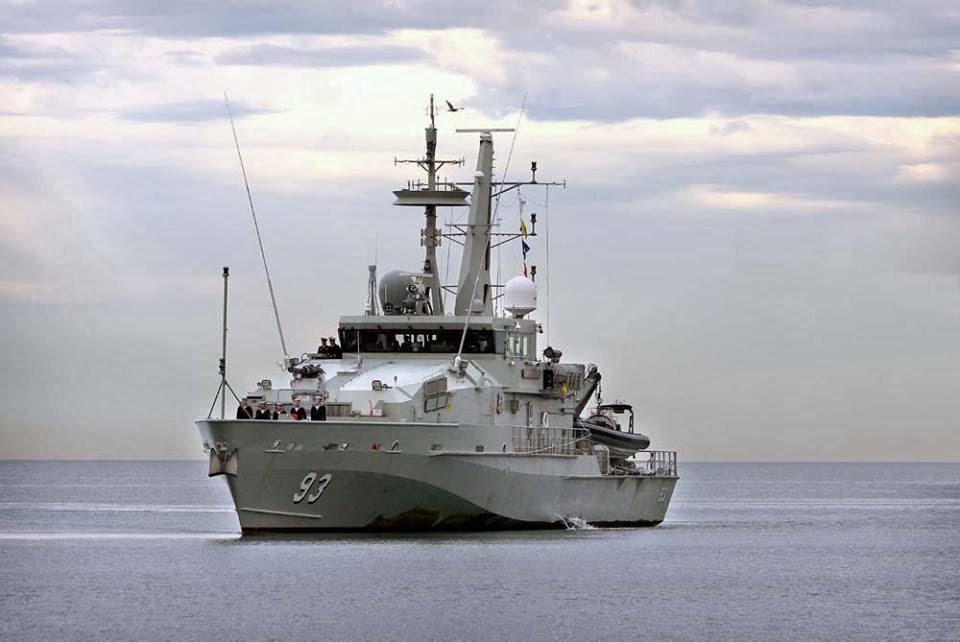 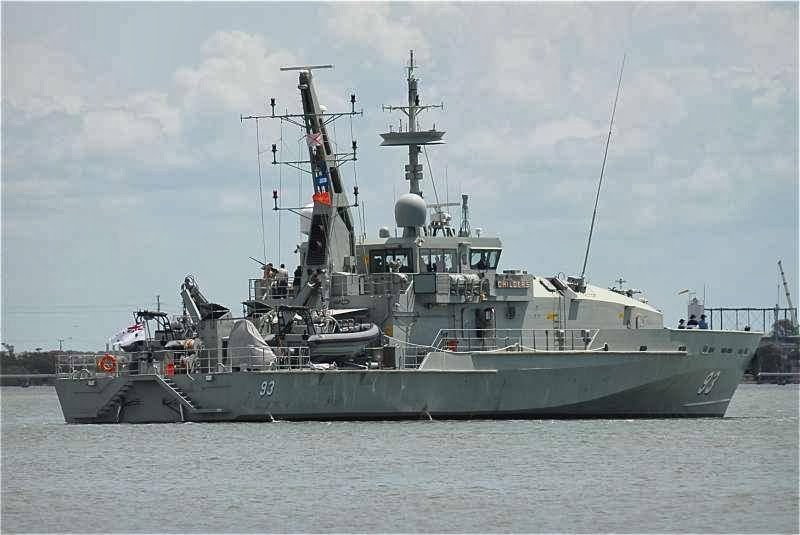