(This post is partly based on news articles from Myanmar Military on December 8, 2013.)

The attractively-discounted deal to purchase some billion dollars worth of military hardware including a number of Kamov Ka-27 choppers from Russia was signed and sealed in 2013 June when Burma Army Chief Senior-General Min Aung Hlaing and his delegation of senior armed-forces officers visited Russia.

Kamov Ka-27 chopper popularly known as NATO’s name Helix looks like a huge dung-beetle with two coaxial-rotors stacked together on top. It was developed in 1973 and is being used since 1988 till today in Russia, China, India, Ukraine, Vietnam, South Korea, and Algeria as combat military choppers.


A civilian version of Kamov Ka-27 is also being used as rescue and fire-fighting helicopters in Japan, Brazil, Switzerland, and Portugal. 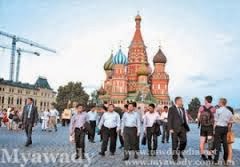 India's state-owned Bharat Electronics Ltd (BEL) has secured a contract to supply a number of ship-borne sensors to Myanmar. A contract was signed in mid-January 2013 for the delivery of three sets of RAWL-02 Mk III L-band 2D search radars, which are licence-built versions of the Thales LW-08 radar, commercial-off-the-shelf (COTS) navigation radars, and a hull-mounted sonar system. The latter is likely to be the HUMSA system. These are to be fitted to frigates under construction in Myanmar.

Myanmar has a frigate construction programme under way at its naval dockyard in Yangon. The first of the 106 m-long frigates, UMS Aung Zeya (pennant number F11), is fitted with what appears to be an older variant of the RAWL. A second hull, with a stealthy superstructure, was launched in September 2012 as UMS Kyan-Sit-Thar (F12). The ship is undergoing outfitting, with completion slated for early 2014.

A third frigate is under construction at Sinmailik Naval Dockyard, Rangoon, according to Burmese Navy sources. Its keel-laying ceremony took place on 5 September 2010, and hull framing was largely complete by February 2012. The BEL deal could mean a fourth frigate is on the way, and reports indicate eight frigates are planned.
Kamov Ka-27 Chopper’s History

The Kamov Ka-27 was developed to replace the Ka-25 in Soviet naval service, and is now the Russian navy's standard ship based ASW (Anti Submarine Warfare) helicopter.

The Kamov design bureau began work on a successor for its Ka-25 in 1967, when Sergei Mikheyev became chief designer following Nikolai Kamov's death. The Soviet navy required a replacement for its Ka-25s which could not operate dunking sonar at night or in poor weather. The result was the Ka-27 (NATO name 'Helix'), an all new helicopter of similar overall dimensions to the Ka-25 and featuring Kamov's signature counter rotating coaxial main rotors. The Ka-27 flew for the first time in 1973.

The Ka-27's similar overall dimensions to the Ka-25 means it requires only the same amount of deck space to operate from as the older helicopter. However the Ka-27 features more powerful Isotov turboshafts which turn redesigned but similar diameter rotors giving greater performance and allowing higher weights.

The basic Ka-27PL anti submarine warfare helicopter features an under nose mounted search radar, dipping sonar and disposable sonobuoys. The Ka-27PL usually operates in 'hunter killer' teams, with one aircraft tracking the target sub, the other dropping depth charges. The Ka-28 is a downgraded export version of the Ka-27PL, while the Ka27PS is a naval SAR helicopter with some ASW equipment deleted, an external winch and fuselage side mounted fuel tanks. The Ka-29 assault transport derivative is described separately. 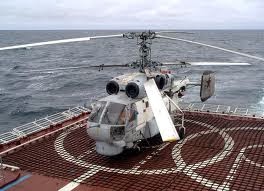 The helicopter is fitted with a coaxial main rotor with folding blades. The composite blades are fitted with an electric thermal de-icing system. The aerodynamic and design parameters allow the helicopters to be stowed in small ship-borne hangars. The landing gear provides for safe take-off and landing on rocking ship decks. Corrosion-resistant materials have been used in the construction to ensure normal operation in active sea environments. The helicopter is fitted with ballonet flotation devices for emergency landing on water.

The helicopter is equipped with a radar system for navigation and to detect surfaced submarines and responder beacons. The VGS-3 dipping sonar detects submarines, determines the coordinates of the submarine and transfers the data in semi-automatic mode to data transmission equipment. The mission computer carries out automatic control, stabilisation and guidance of the helicopter to the mission areas to attack targets. The helicopter also has a magnetic anomaly detector (MAD) and an airborne receiver to detect and guide the helicopter towards sonar buoy radio transmissions. 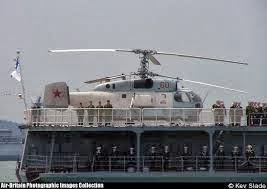 The helicopter is armed with one homing torpedo, one torpedo rocket, ten PLAB 250-120 bombs and two OMAB bombs. It is fitted with a heated torpedo bay, ensuring the reliability of weapons in low-temperature weather conditions.

The Ka-32 is the civil version of the Ka-27, and while none have been sold to military operators, some Ka-32s in Aeroflot markings have been observed operating off Russian naval vessels.

The Ka-27 "Helix" is the primary multi-role helicopter for the Russian Navy. It operates off of ships and performs a multitude of duties including, but not limited to: anti-submarine warfare (its primary role), search and rescue, maritime patrol, anti-surface warfare and transport duties.

The Ka-27 was introduced into the Soviet Navy as a replacement for the aging Ka-25 "Hormone" in 1982. The Ka-27 was designed much to the same dimensions as the Ka-25, so that it could utilize the existing decks on Soviet warships designed for the Ka-25, but although the two have many design similarities, the Ka-27 is distinguishably longer than the Ka-27. 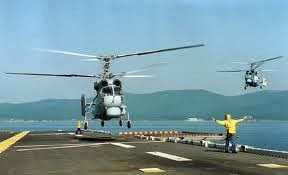 The first version of the Ka-25 to enter service was the Ka-25PL "Helix-A". The PL was designed strictly as an Anti-Submarine Warfare (ASW) platform. It can, however, participate in limited rescue and transport operations. For the ASW role, the Helix has a weapons bay under the fuselage that can accommodate torpedoes and other stores as well as sonobuoys, but as of yet, there are no accurate accounts of the weapons capabilities or the possible armament of the Ka-27PL.

The second version of the "Helix" to enter service was the Ka-29TB "Helix-B". This version is quite different than the -25PL in a number of ways, because the -27TB is an assault helicopter. It is designed to haul 16 fully armed troops from ship into combat in its spacious cabin. Instead of the weapons bay under the fuselage, there is a whole lot of armor plating. The rescue winch has been removed from above the left rear entrance, and all ASW capabilities have been lost in the conversion from the patrol and ASW role to the assault role.

The final version of the "Helix" to enter service was the Ka-27PS "Helix-D", which is essentially the same as the civil version, the Ka-32 "Helix-C". Both versions have no ASW capability, no rescue capability, and are bound strictly to the transport role.