(News article and photos direct from The Clarion Project on January 5, 2014.)

About 30 Bangladeshis protested on December 22 outside the headquarters of the Islamic Circle of North America in New York. The demonstrators are demanding the deportation of a former senior ICNA official that has been indicted in Bangladesh for war crimes.

The protest was organized by the New York chapter of Ekatturer Ghatak Dalai Nirmul Committee. It was founded in 1992 by the late Jananara Imam, a progressive female Muslim seeking justice for atrocities committed during the Bangladesh Liberation War with Pakistan.

ICNA, meanwhile, is mobilizing to convince the U.S. government to demand that Bangladesh stop prosecuting leaders of the Islamist Jamaat-e-Islami group for war crimes. Uncoincidentally, ICNA is a derivative of Jamaat-e-Islami.


ICNA the US Islamist Group is hiding Bangladeshi war-criminals

ICNA is telling its membership to call the White House and State Department to protest the Bangladeshi government’s execution of Abdul Quader Mollah, a leader of the Jamaat-e-Islami group, for committing war crimes during Bangladesh’s war for independence from Pakistan.

Molla earned the nickname, “The Butcher of Mirpur,” during Bangladesh’s war for independence from Pakistan in 1971. He and Jamaat-e-Islami sided with Pakistan in the conflict that ended the lives of some three million people.

Mollah belonged to the Al-Badar paramilitary force, a creation of Jamaat-e-Islami’s student wing. In February, Bangladesh’s International Crimes Tribunal ruled that he was guilty on five of six charges of war crimes. It concluded that he murdered at least 344 civilians. He was involved in the beheading of a poet, he massacred her family and raped an 11-year old girl.

One of the eyewitnesses who testified during the trial was Syed Shahidul Haque Mama, who fought in favor of Bangladeshi independence. He said that Molla was the “key person” overseeing the torturing and execution of civilians.

He saw him in a crowd cheering as homes were set on fire and implicated Molla in various murders, including one where a political opponent’s fingers were cut off before he was tied to a tree and then killed. Mama said he found mass graves and a bag full of severed eyes in the areas Molla operated.

Mollah denies responsibility for these crimes, but no one contests the fact that he was/is a senior Jamaat-e-Islami leader and supported Pakistan. As Tahmima Anam writes, the evidence of Pakistani war crimes is irrefutable.

“Pakistani documents detailing operations and massacres, hit-lists of local collaborators, journalists’ reports, photographs and video footage, and, most importantly, the eyewitness accounts of the survivors” are proof, she says.

The website of Jamaat-e-Islami proudly hosts an article about ICNA’s support. ICNA President Naeem Baig said the execution of the Jamaat-e-Islami leader “is a political murder and a dark day for justice.” He would have you believe that its concern is solely based on a desire to see fair trials, but unfair trials happen all over the world. Why would ICNA invest its energy into this specific cause?

Ashrafuzzaman Khan: Bangladeshi War-criminal and Islamist in US

His group’s call-to-action failed to mention an inconvenient fact: One of its former leaders, Ashrafuzzaman Khan, is among those Jamaat-e-Islami leaders that are being tried for war crimes.

Khan was charged by the Bangladeshi tribunal in October 2012 for being the “chief executioner” in at least 18 murders in 1971. His targets were intellectuals in favor of Bangladesh’s independence bid. Three eyewitnesses recall seeing him at murder scenes.

When Khan was asked about the tribunal, he told a reporter, “I don’t know what is happening in Bangladesh. I am not a citizen of Bangladesh” and ended the interview.

A group of 30 Bangladeshis protested ICNA on December 22 and specifically demanded the deportation of Khan. One of the organizers, Saleem Noor, told the Clarion Project that Bangladesh does not have an extradition treaty with the U.S.

“The Bangladeshi community felt obligated to stage that protest in front of ICNA to bring attention to the ears and eyes of the U.S. government so it takes the proper action to send Khan back to Bangladesh,” he said.

Senate Majority Leader Harry Reid (D-NV) reportedly told the Bangladeshi government that he’d try to get the Obama Administration to expatriate him.

Noor explained that Khan has been in New York City since the early 1970s and was “involved in establishing many Islamic religious organizations here in North America that are preaching the fundamentalist ideology.”

In July, it was discovered that Khan was still listed as a “Shura member” of ICNA-NY’s executive board. He was also listed as the President of the North American Imams Federation and the director of its New York regional office. His name has since been deleted by both organizations.

ICNA President Naeem Baig recently confirmed that Khan continues to be an ICNA official. He said, “Mr. Khan was elected by ICNA’s local members and he has their support.” The current Bangladeshi government was elected in a landslide over the Islamists and is led by a secular-leaning woman. Its crackdown on Jamaat-e-Islami is widely-supported.

In February, there was a burst of protests against the group after one of its leaders escaped the death penalty and flashed the victory sign after his sentencing. Tarek Fatah, an anti-Islamist Muslim in Canada, wrote that it was “the first time ever in the Muslim world there has been a popular uprising against the fascism of Islamist parties.”

A Bangladesh court also barred Jamaat-e-Islami from participating in elections because of its aspirations to replace the country’s secular state with one based on Sharia.

Regardless of one’s opinion on the credibility of the Bangladeshi prosecutions, it is revealing that ICNA would flex its muscles to defend Jamaat-e-Islami. The reason is that ICNA has affinity for the group and ideological and foundational links to it.

Global City NYC writes, “ICNA was started by expatriate members of South Asian Islamic groups, such as Bangladesh’s Jamaat-E-Islami, in the early 1970s.”

An ICNA publication in 1996 is a smoking gun. It said, “Using the organizational development methodology of [Jamaat-e-Islami founder] Maulana Mawdudi and the Jamaat Al-Islami of Pakistan, which lays special emphasis on spiritual development, ICNA has developed a strong foundation.”

ICNA’s official handbook from 2010 references the teachings of Maulana Maududi, the founder of Jamaat-e-Islami, as well as Hassan al-Banna and Yousef al-Qaradawi, the founder of the Muslim Brotherhood and its current spiritual leader.

It also listed the stages Muslims are to follow until ultimately achieving a “united Islamic state, governed by an elected khalifah [caliphate] in accordance with the laws of shari’ah [Islamic law].”

While ICNA’s own texts and actions speak to its Jamaat-e-Islami links, ICNA President Naeem Baig insists his group has “no relations-no links-to any organization or any country outside the United States.”

And it isn’t only Jamaat-e-Islami that ICNA is linked to. A 1991 U.S. Muslim Brotherhood strategy document lists ICNA as one of “our organizations and the organizations of our friends.” It even talks about discussions with ICNA about a merger. ICNA holds its annual conferences with the Muslim American Society, a group that federal prosecutors said was “founded as the overt arm of the Muslim Brotherhood in America.”

After the Muslim Brotherhood and President Morsi were overthrown in Egypt, ICNA and MAS held protests demanded the group’s restoration to power.

Luckily, a 2011 Gallup poll found that only 2% of Muslim-American males and 0% of Muslim-American females choose ICNA as the organization that most represents them, but that doesn’t prevent ICNA from putting together massive events attended by tens of thousands of Muslims.

Its last conference was attended by 18,000 and another 14,000 watched online. ICNA may not be the most popular Muslim-American group, but it is one of the most powerful. And it is now using its muscle to make the U.S. pressure the Bangladeshi government.
ICNA New York Scrubs Accused War Criminal From Web Page

A verdict against New York resident Ashrafuzzaman Khan for alleged crimes against humanity during Bangladesh’s 1971 war of independence could come any day. Testimony before a war crimes tribunal wrapped up in late September.

Khan, a naturalized American and a leader of the Islamic Circle of North America’s (ICNA) New York chapter, is accused of being the “chief executor” of a killing squad loyal to the Pakistani army. As Bangladesh moved toward independence, the squad allegedly rounded up intellectuals – scholars, doctors and journalists – and then tortured and killed them to deprive the new nation of leadership.

Niether he nor ICNA has commented publicly since the charges were issued.

Last week, the ICNA New York chapter quietly removed the names of executive board members, including Khan, from its web page. Previous IPT stories on Khan linked to that page when it included Khan’s name. A writer identified only as Shehab described asking ICNA back in July whether the chapter’s board member was the same man facing the war crimes tribunal.

If it is the same man, Shehab said he wrote in his email to ICNA ,”does ICNA have any plan to initiate its own investigation about the role of Ashrafuz Zaman Khan in Bangladesh during 1971 and the channel which associated him with ICNA hiding his past?”

He received no response until last week. After the web page was scrubbed, Shehab says he received an email from ICNA Secretary Hafiz Zafeer Ali. “He advised me to ‘focus on my study and do not involve [in] back home politics’,” Shehab wrote.

Khan previously served as ICNA’s secretary general. He and Chowdhury Mueen-Uddin, a prominent imam in the United Kingdom who helped create the Muslim Council of Britain, were tried in absentia.

One eyewitness, a hostage who escaped before he could be killed, testified that he saw Khan giving orders to the death squad members. Other witnesses said they later recognized Khan as the man who took their relatives away at gunpoint after his picture appeared in Bangladeshi newspapers.

ICNA was founded by South Asian Muslims and its constitution draws heavily from the Jamaat-e-Islami. The Jamaat was loyal to Pakistan during the 1971 war. The killing squad, known as Al Badar, was a Jamaat offshoot.

ICNA’s curriculum also emphasizes writings by Jamaat founder Syed Abul Ala Maududi. He advocated that Muslims “must strive to change the wrong basis of government, and seize all powers to rule and make laws from those who do not fear God.”


As of Friday, Khan remained listed on the contact page for the North American Imams Federation Northeast regional office. 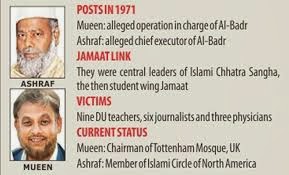