Near Riots In Meikhtilar After Muslims Killed A Buddhist

(News article and photos direct from The Singapore Feel Blog on January 10, 2014.)

Meikhtilar the hot bed of Buddhist-Muslim riots last year is reaching near-riot situation again after three Bengali-Muslim Men attacked and killed a Buddhist man in its Pyi-thar-yar Ward on the outskirt of the city in middle Burma.

Three Bengali-Muslim killers were later arrested and taken to Meikhtilar Main Jail as the local Buddhist crowd gathered in the nearby BOC Exit Road and started demanding their blood. Government later announced on radio and TV and Newspapers that the near-riot situation had been timely brought back under control.


Hundreds and hundreds of the heavily-armed members of local Security Police Battalions (Lone-Htain) were seen patrolling the city as the hostile crowds of both Burmese-Buddhists and Bengali-Muslims were gathering all over Meikhtilar yesterday.
Fights Over Struggle To Gain Mosque-cash For Muslim Coverts

The murdered victim Phoe Pyu (aged 25) was a Buddhist-Burmese married to Zin Mar Oo whose sister Khin Myo Aye was a Burmese-Buddhist married to a Bengali-Muslim and coercly converted to Islam recently.

Her Bengali-Muslim husband Aung Zaw Htway has been provided by the Pyi-thar-yar Mosque with a bank-deposit-book and drawing monthly stipend as a reward for his successful conversion of a local Buddhist woman to Islam and impregnating her.

Muslim-convert Khin Myo Aye was now 3-month pregnant and on January-9 she had a fight with her Bengali-Muslim husband and got severely beaten and fled from her violent husband and stayed with her sister Zin Mar Oo and her husband Phoe Pyu at their house.

At about noon of January-11 Khin Myo Aye went back to her house together with her sister to get the Mosque-provided bank-deposit-book. But her Bengali-Muslim husband refused and swore violently at both women who eventually had to come back home.

Once Pho Pyu was told about the dishonourable treatment of his wife and her pregnant sister he went to the Bengali-Muslim house at about 5 pm and got into a fight with three Bengali-Muslim brothers.

In the unbalanced fight the Burmese-Buddhist man was overwhelmed and he had to flee. But the Bengali-Muslim brothers chased him and caught up with him at right in front of his house.

He was hit on the head hard with a steel rod by one Muslim brother and as he fell he was repeatedly stabbed by other two Muslim brothers till he lay dead on the dirt ground right by his house.


The news of violent murder had immediately spread like wild fire all over town and last-year-like Musim-Buddhist riots are nearly breaking out again in Meikhtilar where the Bengali-Muslim population has alarmingly reached to more than 30% of Meikhtilar’s total population due to illegal immigration from Bangladesh and their jack-rabbit-like over-breeding. 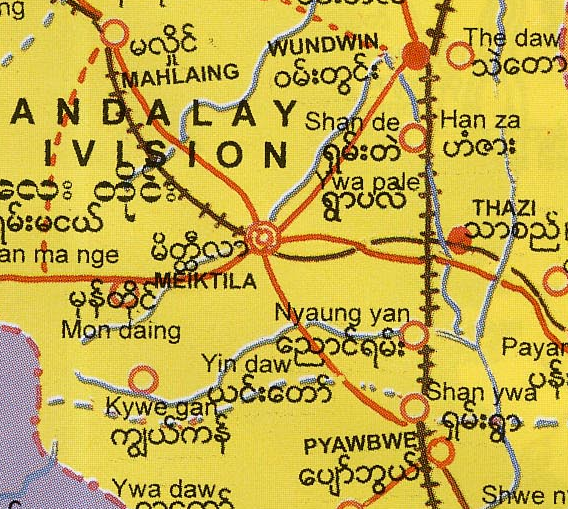 Related posts at following links:
Burma's Meikhtilar Burning by Anti-Muslim Race Riots
Massacre at Illegal Madrassa In Meikhtilar (March 2013).
Monk Thawbita burned alive by Muslims in Meikhtilar
All 14 huge Mosques but one Destroyed by Buddhists in Meikhtilar
Posted by Hla Oo at 12:09 AM