(Part of this post is based on reports from Myanmar Military site on December 20, 2013.) 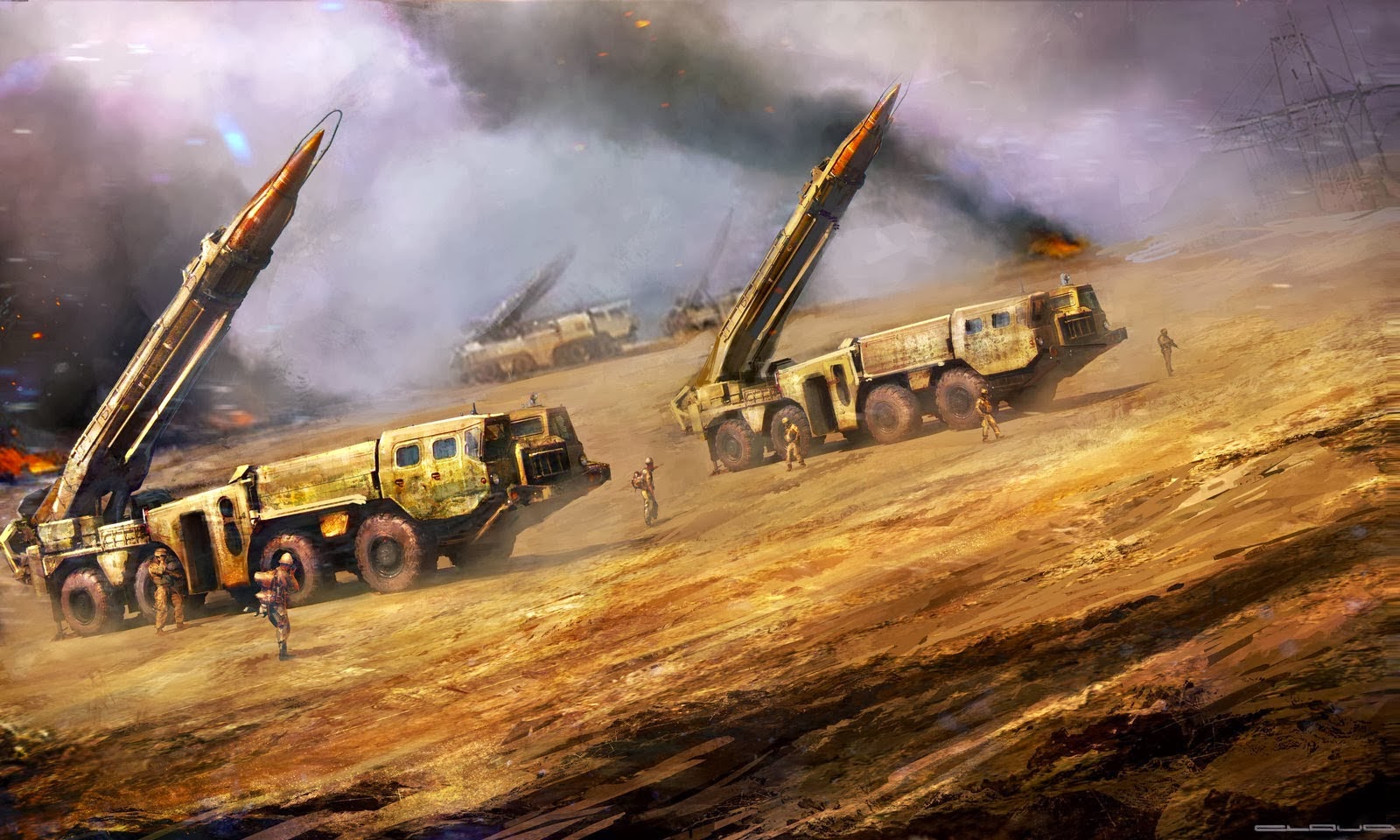 The SS-26 Iskander missiles were primarily developed to counter the US-made Patriot anti-missile missiles which devastated Russian made SCUD Iraqi missiles in the 1991 Gulf War between US-led alliance and Saddam Hussein’s Iraq.

Russian Army once used their SS-26 Iskander missiles on enemy Georgian positions during the Ossetia War between Russia and Georgia in August 2008. In a devastating attack on a Georgian tank battalion Georgia claimed that despite the heavy air-cover from Georgian Air Force a single Russian SS_26 Iskander missile strike had destroyed 28 Georgian T-72 tanks and killed nearly 100 troops in one enormous explosion. The Iskander (NATO designation SS-26 Stone) short-range ballistic missile is a successor to the Oka (SS-23 Spider), which was eliminated under the INF Treaty. It was first launched in 1996 and was initially designated by NATO as the SS-X-26. It is considered the most advanced missile of its kind.

The Iskander road mobile missile system is equipped with two short-range ballistic missiles, which substantially increases firepower of missile units. Each missile can be independently targeted. System is capable of hitting moving targets, as target coordination can be adjusted while missile is in-flight.

The Iskander has several different conventional warheads, including cluster, fuel-air explosive, bunker-busting and electro-magnetic pulse. Maximum range of fire is estimated to be 280 km. Minimum range is 50 km.

The Iskander was designed to overcome air defense systems. Missile files at supersonic speed, excessively maneuvers in the terminal phase of the flight and releases decoys. In some cases this ballistic missile can be used as an alternative to precision bombing.

The transport-erector-launcher (TEL) vehicle uses MZKT-7930 Astrolog 8x8 high mobility chassis. It is powered by the YaMZ-846 diesel engine, developing 500 hp. Vehicle can be airlifted by the An-124 transport aircraft.

The Iskander TEL is supported by a reloading vehicle, based on the same 8x8 chassis, which carries two reload missiles. Full missile system also includes command vehicle, information preparation vehicle, maintenance and repair vehicle and life support vehicle. All of these vehicles are based on KamAZ 6x6 trucks. 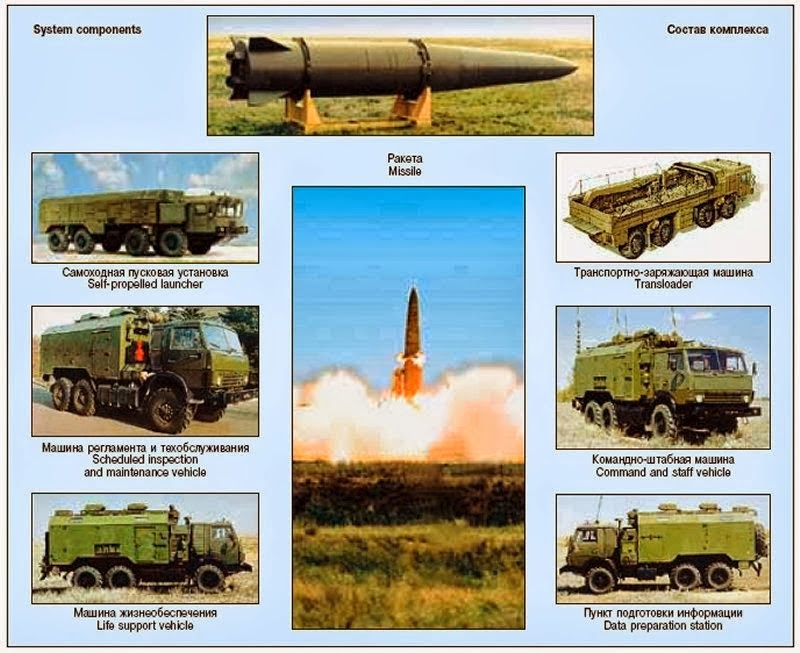 Present variants of SS-26 Iskanders are as follows:

Iskander-E:  export version, specially designed to meet MTCR restrictions. It a maximum range of 280 km. This missile is fitted with internal guidance system and has a CEP of 30 - 70 m. This missile system has been exported to Syria (26 units);

Iskander-M: improved version adopted by the Russian Army. Its estimated maximum range is 400 km. It is worth mentioning that this range can be extended, however this will violate INF Treaty. This ballistic missile is also fitted with both internal and optical guidance and has significantly improved firing accuracy. It has a claimed CEP of only 2 m. Optical seeker provides self-homing capability. This improved version can also launch R-500 Iskander-K cruise missiles in the same manner as ballistic missiles. This cruise missile has a range of 500 km.

SS-26 Iskanders: Too Good To Abandon (From the Strategy Page)

December 27, 2013: Although Russia is in the process spending a trillion dollars to replace its Cold War (1947-91) era weapons it still has some new stuff from the 1980s that it believes in but cannot get any export sales for. An example of this is the SS-26 (9M723K1, or "Iskander") ballistic missile.

The Iskander began development near the end of the Cold War. The first successful launch took place in 1996 and it entered service in 2005. The 4.6 ton Iskander M has a solid fuel rocket motor and a range of 400 kilometers, with a 710 kg (1,500 pound) warhead. 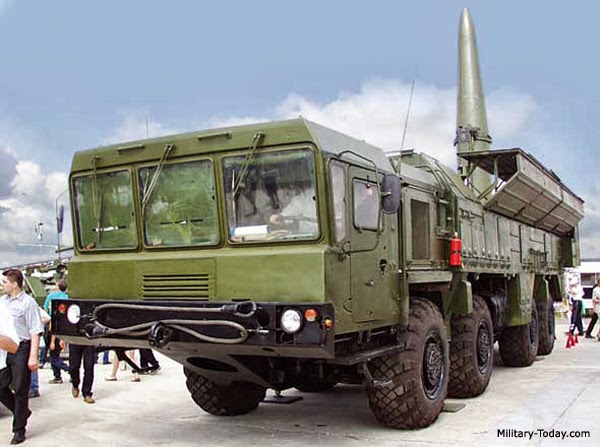 The missile can be stored for up to ten years. Russia produces several different types of warheads, including cluster munitions, thermobaric (fuel-air explosive) and electro-magnetic pulse (anti-radar, and destructive to electronics in general.)

There is also a nuclear warhead, which is not exported. Guidance is very accurate, using GPS, plus infrared homing for terminal guidance. The warhead will land within 10 meters (31 feet) of the aim point.

One unique feature of Iskander is that it is not a traditional ballistic missile. That is, it does not fire straight up, leave the atmosphere, then come back down, following a ballistic trajectory.

Instead, Iskander stays in the atmosphere and follows a rather flat trajectory. It is capable of evasive maneuvers and deploying decoys. This makes it more difficult for anti-missile systems to take it down. Russia has admitted that it could use Iskander to destroy the planned East Europe U.S. anti-missile systems in a pre-emptive attack.

Russia is buying a special version (Iskanders-M) for its own military. This version has a longer range (400 kilometers) than the export version and more countermeasures (to interception). Russia will not provide details on the electronics. Iskanders are carried in a truck which also provides a launch platform. There is also a reload truck that carries two missiles.

Russia developed the solid fuel Iskander to replace its Cold War era SS-23 battlefield ballistic missiles (which in turn had replaced SCUD, which was derived from the first military ballistic missile, the World War II German V-2). The SS-23 had to be withdrawn from service and destroyed by 1991, because the 1987 Intermediate Nuclear Forces (INF) treaty prohibited missiles with ranges between 500 and 5,300 kilometers.

When post-Cold War financial problems slowed down development of Iskander Russia was left dependent on the shorter range (120 kilometers) SS-21 system, along with some aging SCUDS, for battlefield ballistic missile support. Russia used some of these older missiles against Chechen rebels in the 1990s, along with a few Iskanders. The Iskanders were more effective. But the Iskanders cost more than a million dollars each, which is several times more than what SCUDs go for.

Some Iskanders were used against Georgia in 2008. Also that year, Russia threatened to send some to Kaliningrad, as a way to threaten the new NATO anti-missile system being built in Poland (to protect Europe from Iranian missiles). In 2009 Russia agreed to not send the missile to Kaliningrad, because the U.S. had decided against setting up the anti-missile system in East Europe. 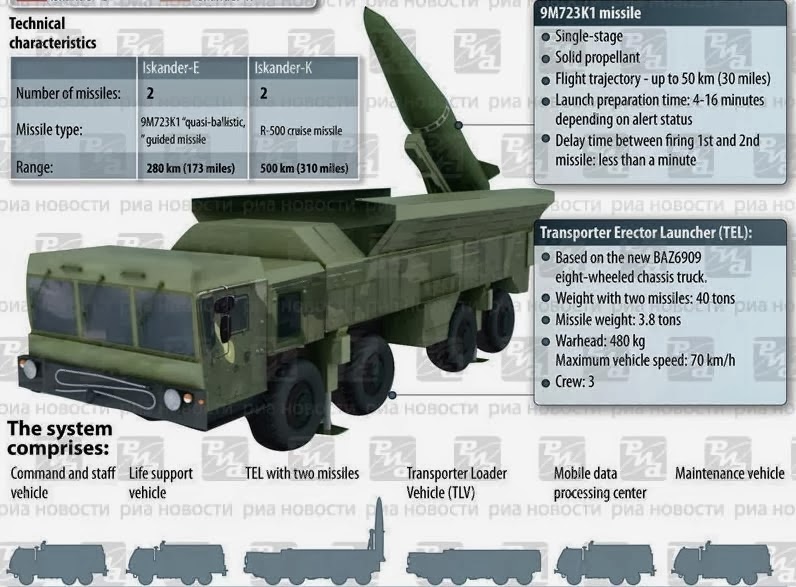 Until the last few years Russia was not able to buy many of these missiles itself, even though they have been available since 2005. But since 2010 there has been a lot more money available for arms purchases, and Iskander is seen as something worth spending more on for procurement and further development.

Russia originally planned to build at least five brigades of Iskander (60 launchers in total, each with two missiles, plus reloads, which could amount to over a 150 missiles). Each 8x8, 40 ton launcher carries two missiles and a crew of three. Iskander was just entering mass production in 2009, and only two brigades were believed in service then. One was deployed near St Petersburg, much to the consternation of nearby Estonia. In 2010, six systems were built.

Russia decided to buy at least 120 Iskanders if only to keep it in production until some export customers could be found. Initially, Syria, Kuwait, South Korea, India, Iran, Malaysia, Singapore, Myanmar (Burma), and the United Arab Emirates expressed some interest in Iskander.


The export version, Iskander-E, would have a shorter range (280, instead of 400 kilometers) and fewer countermeasures for the warhead. But so far only Iran has expressed willingness to buy, but this is unlikely because of international sanctions against sending offensive weapons to Iran.

Satellite photos recently revealed that some Iskanders had been quietly stationed on the eastern border of Russia, aimed at something in East Europe or parts of West Europe. 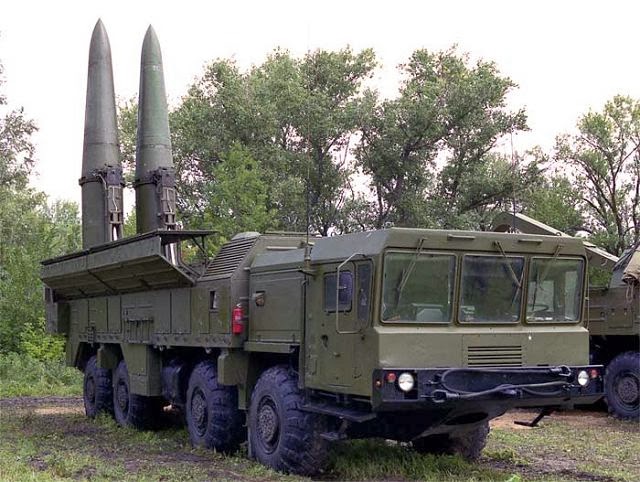