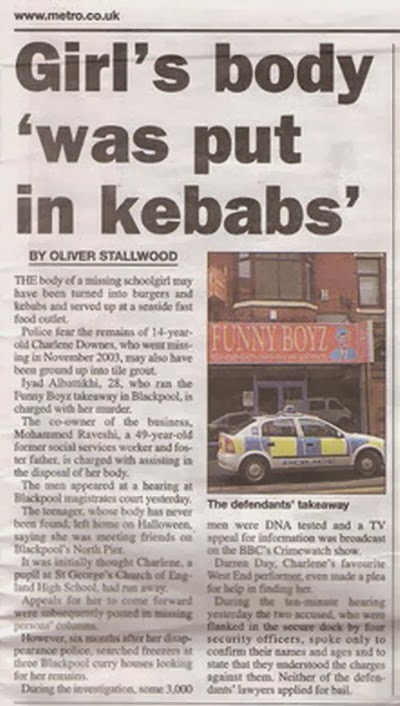 Mother of murdered girl put into kebabs runs from court after gruesome testimony. A mother ran from court today as she heard how her daughter was strangled before being chopped up.

Iyad Albattikhi, 29, (a Jordanian Muslim immigrant) known as Eddie, had sex with 14-year-old Charlene Downes, before killing her and joking her body had been put into the kebabs at his shop on Blackpool Promenade, Preston Crown Court has heard.

Today David Cassidy, a former friend of the accused, told Preston Crown Court how the defendant's brother confessed to him about the murder - and that the youngster had been throttled to death. Mr Cassidy, 40, who ran an amusement arcade in the town, told the jury Tariq Albattikhi had rowed with his brother and, upset and in tears, told him about how the schoolgirl had been killed.

"He was crying," Mr Cassidy said. "He said there was a lot of blood. I was only getting a bit of the conversation through the tears. He told me that she was strangled."


At this point Charlene's mother, Karen Downes, sitting in the public gallery, gasped and fled the court in tears. Charlene, from Buchanan Street in Blackpool, disappeared on November 1, 2003, after kissing her mother goodbye to go off with friends. Expelled from school, she spent most of her time hanging around the shops on the Prom, where Albattikhi owned and ran Funny Boyz kebab shop.

Albattikhi, a Jordanian Muslim immigrant, is charged with murder and his co-accused, his business partner and landlord, Mohammed Reveshi, 50, another Muslim immigrant originally from Iran, is accused of helping to dispose of the body.

Both deny the charges and have told police they never knew Charlene. Ian Goldrein QC, defending Albattikhi suggested Mr Cassidy was telling the court a "pack of lies" and suggested the conversation never took place.

He said the witness had a long criminal record for dishonesty stretching back to the age of 17 - and could not be relied upon to tell the truth.

Mr Goldrein asked the witness why he waited months after the conversation with Tariq before he told police. Mr Cassidy said, "Because I did not know if what was being said to me that night was true. I had to determine whether it was hearsay or gossip."

A young 14-year old Charlene Downes was forced into a child sex ring, murdered, then butchered by two Muslim men and chopped up and sold as kebab and curry meat in 2003 through their fast food outlet.

All over Britain young children are being singled out, threatened with beheading, drugged and then trained through violence, indoctrination, alcohol and drugs into child-sex grooming by Muslim men who sell them to be raped by Muslim clients. This “business” of human slavery is being done to children from all communities. Over 2,400 victims have been identified to date and more and more victims are being discovered regularly.

No justice has been provided to Charlene Downes family as of date who continue to live with the incredibly painful memories of the brutal Muslim abuse and murder of their young girl, while the Muslims walk free.
British School Girls Are Groomed To Become Sex-slaves By Muslims

At least 60 schoolgirls were groomed for sex by workers at seedy takeaways linked to the murder of a 14-year-old girl. Children as young as 11 were targeted by mainly Asian staff at fast food outlets in Blackpool. They were offered food, alcohol and cigarettes in return for sexual favours.

An unpublicised police report produced after 14-year-old Charlene Downes vanished in 2003 found the girls, most if not all white, had been victims of the ‘honey pot’ premises. There were claims last night that the report was suppressed for reasons of political correctness.

Four years later another girl, 15-year-old Paige Chivers, also went missing. Detectives believe she was killed like Charlene, whose body has never been found. Two Middle Eastern restaurant owners were acquitted over Charlene’s murder in 2007 and the crime remains unsolved.

The pair still run a kebab shop in Blackpool which was also linked to Paige, and she too was identified as a victim of sexual exploitation. Last year police reported that the takeaway was attracting young girls who were being supplied with alcohol and cocaine.

The revelations about the scale of grooming centred around the downmarket cafes comes amid growing concern at disturbing cases involving mainly Asian gangs exploiting young white girls for sex in the Midlands and North of England.

The girls, often from vulnerable homes or in the care system, were befriended by men who showered them with gifts and affection before using them for sex.

Former Home Secretary Jack Straw has said the girls were seen as ‘easy meat’, while David Cameron called on police to follow criminal acts ‘without fear or favour’ wherever the evidence leads. The Home Office commissioned a nationwide investigation into the problem, which has long been considered taboo by police officers fearful of being branded racist.

Indeed, a former senior detective at Lancashire Police yesterday blamed political correctness for its failure to highlight its 2003 findings in Blackpool. But the force denied this, saying the report had been available online since 2007 but had never been intended for publication.

Senior officers insisted an intensive programme to break the cycle of exploitation had been a success and that in the last six months 50 of 54 grooming suspects were white. 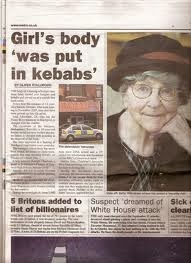 Shocking claims made in court over Charlene’s murder revealed fears that her body had been put through a mincing machine, with takeaway staff said to have joked that her remains had ‘gone into the kebabs’.

A jury failed to reach a verdict on charges that Jordanian immigrant Iyad Albattikhi had murdered her while his Iranian landlord Mohammed Reveshi had disposed of her body. A retrial collapsed in 2008 amid failings in the police investigation and the men were paid almost £250,000 each in compensation.

The kebab shop run by Mr Albattikhi and Mr Reveshi has changed its name from Funny Boyz to Mr Beanz. It was refused a hot food licence last year amid fears about ‘sexual activity’ linked to the premises, but the pair blame a ‘police vendetta’ and have appealed.

Following Charlene’s disappearance in 2003, police found more than 60 girls were being groomed for sex by non-white men centred around 11 Blackpool takeaways. They were mainly aged between 13 and 15, but some were as young as 11. Yesterday former Detective Superintendent Mick Gradwell warned that research into the problem was being hampered by ‘political correctness and concerns about upsetting community cohesion’.

But Lancashire police denied a cover-up. Assistant Chief Constable Andy Rhodes said his officers were making significant progress in tackling child sex exploitation across Lancashire, regardless of the background of the culprits.

He added: ‘We recognise that in some areas the number of Asian offenders is disproportionate to the population and far from ignoring this, have been tackling the issue head on by working with the local communities, giving presentations to community forums and visiting mosques to raise awareness.’


It was reported yesterday that while most British sex offenders are lone white men, details of court cases in 13 towns showed that out of 56 men convicted of multiple offences of grooming girls for sex, 50 were Muslim, mostly of Pakistani heritage. 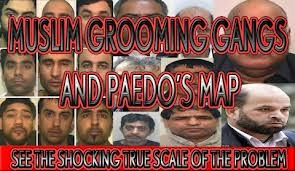 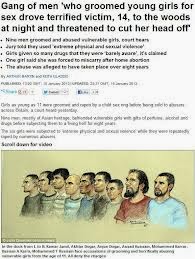 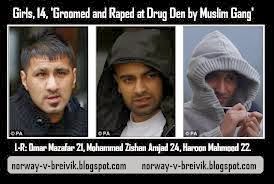 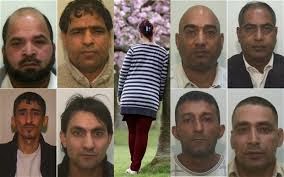 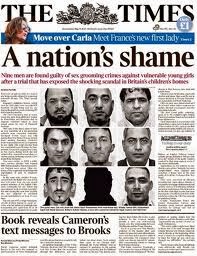